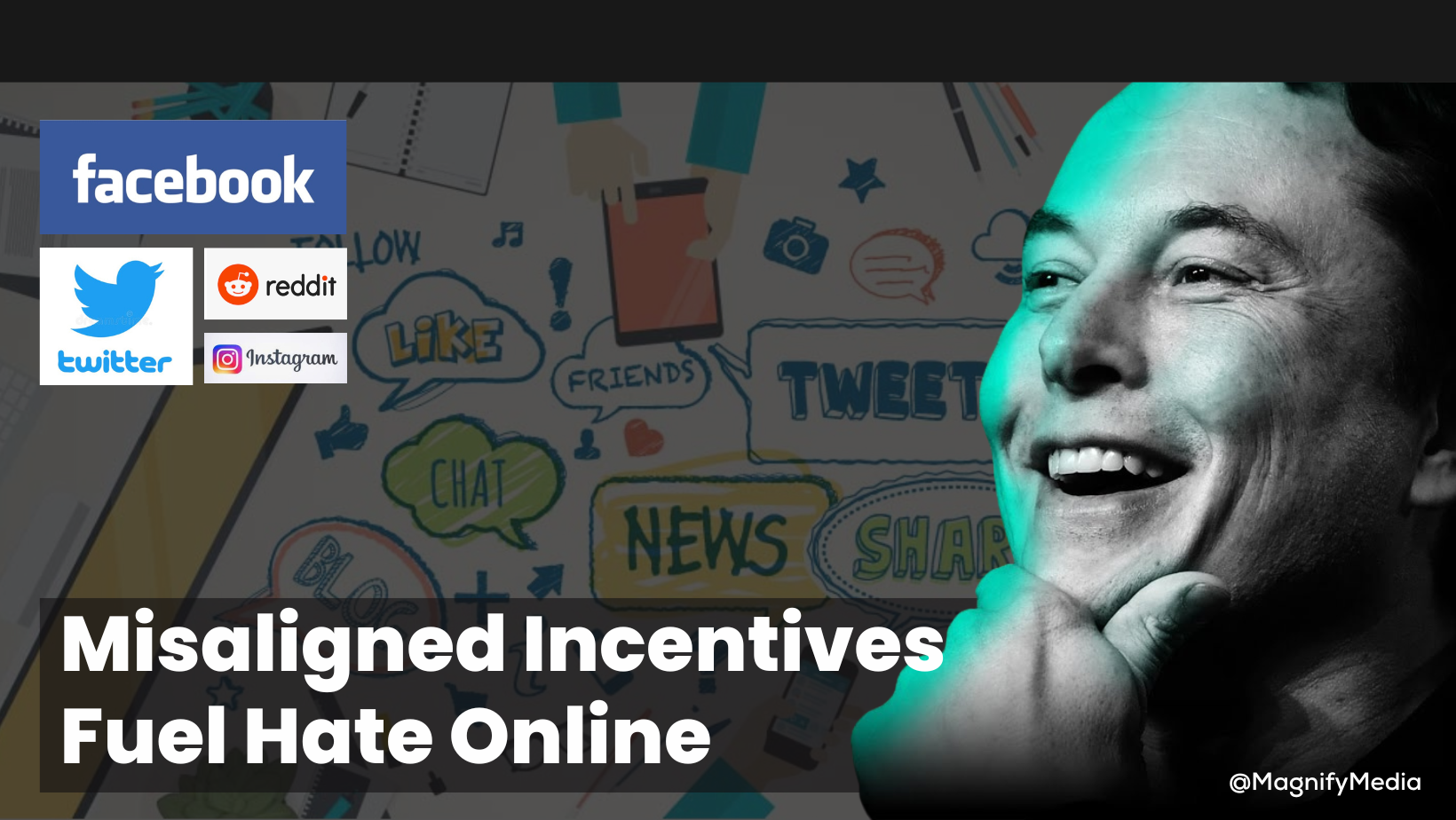 Over the past week, I’ve led a series of conversations about the current state of media, and the increasing sense that media platforms are amplifying hate and misinformation. There are lots of theories about what has brought us here, but the one phrase that comes up with the most urgency is the media’s “misaligned incentives.”

What does this mean, and what are some potential solutions?

Social media is at the core of these misaligned incentives, so I’ll focus on that here. Platform companies claim to be technology companies, not content companies.  They use data gathered, often surreptitiously, from users to serve advertising. Their singular focus is scale, meaning ever-bigger. More eyeballs mean more profit.

First, the attention economy generates perverse effects. It encourages companies to highlight the kind of content that keeps viewers' attention. This content is less likely to be informative or educational, and more likely to be false, demagogic, conspiratorial, and incendiary, and to appeal to emotions such as fear, envy, anger, hatred, and distrust.

Third, Facebook and Google have dried up revenues for newsgathering organizations, who either get an increasingly small amount of ad revenues or have to take crumbs off the table from Facebook and Google. The internet has created news deserts for local news and increased incentives for consolidation of media organizations into a handful of large companies.

Balkin calls out Facebook and Google (YouTube) appropriately. But his post “How to Regulate (and Not Regulate) Social Media” was published in 2021, and TikTok hadn’t yet risen to the top of this ravenous food chain. And certainly, you’d have to include Reddit, Twitter, Instagram, and others in this race toward the editorial bottom.

The state of misaligned incentives is hardly theoretical. The rising tide of hate has protectors of freedom sounding the alarm. The Anti-Defamation League’s Jonathan Greenblatt noted, as racism showed a staggering rise after Elon Musk’s takeover of Twitter: "as with Telegram, Gab, Parler, Rumble, and other platforms that refuse to address incitement and slander in the name of free speech, such platforms have become hotbeds for radicalism and hate.”

Nobel Prize-winning economist Joseph Stiglitz makes a compelling argument to consider media a “public good.”   “Having a well-functioning economy, the media provides an important mechanism by which that information gets not only disseminated but also discovered, so the sense in which we talk about in economics of public good it's something from which everybody benefits,” says Stiglitz. In its current ravenous profit model, public good isn’t part of the social media company calculation.

So, if media needs to be protected as a  public good, as Stiglitz suggests, is there a model that provides a platform for that public (rather than private) square?

In New York last month, I met Braxton Woodham, a seasoned internet entrepreneur who sees the public square as something that can be fixed. “Think about cities” Woodham explained. “They have lots of private businesses, buildings, and enterprises, but the streets -- they are public. We build on public infrastructure.”

Woodham’s first business gave him a front-row seat to the construction of what has becomes today's social media. As he explained it, Twitter and Facebook “found that surfacing emotionally triggering content increased user engagement and, fueled by massive data repositories, created ad-based business models that were so lucrative they soon dominated the way the world interacts online.” The result? “A toxic cycle of growth hacking and greed began, leading to what has become a dark age of polarization and rampant disinformation.”

“The erosion of trust in our society has accelerated, making it clear that the social network must become an extension of the web’s core infrastructure — not the private asset of a few corporations,” said Woodham.

DNSP is Woodham’s project within the McCourt Institute to address this social need. “We believe that a public social graph completely disconnected from financial incentives is the first essential piece of infrastructure required to unlock the true potential of social networks for collaboration, and to dismantle the surveillance economy.”