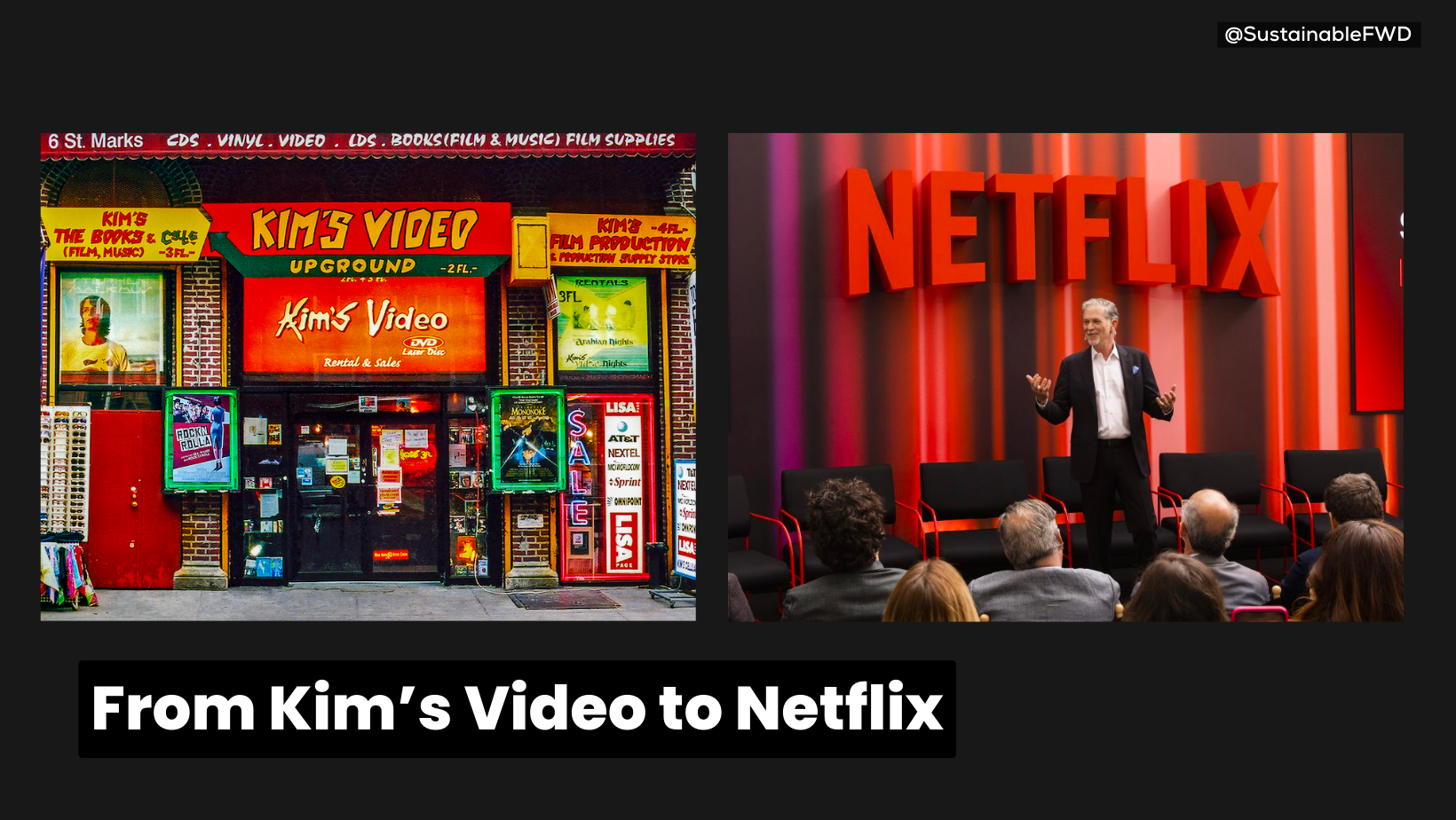 Today I want to write about Kim's Video, an extraordinary little DVD and VHS shop in the East Village, and how it relates to Netflix.

In a weird kind of way, it all comes down to supply and demand.

The documentary “Kim’s Video” premiered at the Sundance Film Festival over the weekend. If you care about the history of movies and how Kim’s survived, died, and was in a sense reborn, then you have to watch this doc.

Kim’s Video was for a time the center of New York City’s movie rental world. Think of Blockbuster, but with diversity and taste. It was a cinephile’s paradise. Launched in 1987 as a shelf in a  dry-cleaning business by Korean immigrant Yongman Kim, its heart and soul were cult films, bootlegs, and movie classics, all shelved by director names.

But by 2008, video stores were being replaced by DVD through mail services, among them Netflix.

Netflix was founded in 1997 in tiny Scotts Valley, California. Reed Hastings had been zinged with a $40 fine for returning the movie “Apollo 13” to Blockbuster six weeks late. Netflix found a pain point and reinvented the experience. Netflix had a queue and a $19.95 monthly price. DVDs were mailed in a red envelope, and once you returned one, the next title in your queue was shipped.

By 2008 video stores were closing down, as Netflix rose to replace them. And then, in 2010, Netflix shifted to be a streaming-first company.

So, simply put, streaming killed the video store, hat tip to the Buggles for the song title.

There’s only one problem with this story, and what we might have presumed would be the outcome. DVDs were physical goods, and so that limited how many videos a store, or even Netflix by mail, could stock or ship. If someone had a copy of a rare movie, you’d have to wait until they returned it to borrow it.

Theoretically, the digital version of Netflix should have had a deeper shelf, and an unlimited number of copies of Wim Wenders’ or Jim Jarmusch’s rare film.

It didn’t work out that way.

Kim’s Video had an almost unimaginable collection of 55,000 movies, while Netflix has just 17,300 titles across all its international libraries as of October 2022 (this according to data from unogs.com). And Netflix’s collection varies from region to region. It offers content in over 60 languages, and each country or region has its own specific number of movies and TV shows available.

Netflix's shift from DVDs to streaming revolutionized online video, while Kim’s Video has had a surprising drama and reinvention. After a deal with Alamo Drafthouse, Kim’s video is now once again a destination for DVD borrowers in New York City.

The documentary by director David Redmon and his filmmaking partner Ashley Sabin is in itself a gripping drama.

What’s next for movie distribution? That chapter has yet to be written.