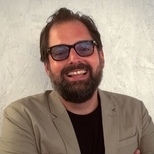 Jason Alan Snyder is a technologist, futurist, marketer and business strategist. In his role at co-creation agency Momentum Worldwide, Snyder collaborates with creative, strategy, business leadership and production talent to ensure the most effective and current technology solutions for Momentum clients – offering insights to emerging technologies that boost experience and engagement. Snyder is a reputed technologist, futurist and business strategist with nearly two decades experience in the creative development of technology products and services. As a technologist Jason has led the creative development of digital products, applications and services for nearly two decades. With nearly a decade of service at various InterPublic Group agencies including as a founding member of Deutsch's digital capability (iDeutsch) and most recently at McCann Erickson (MRM Worldwide) he has also held the position as head of Product Design at AOL and Yahoo!. His brand work includes Google, American Express, Coca-Cola, Microsoft, U.S. Army, IKEA, Johnson & Johnson, Porsche, Nike, Procter & Gamble, TiVO, and Unilever among others. Jason's specialist knowledge in developing mass market consumer software products, applications and mobile technologies, combined with hands-on experience building Human Computer Interaction (HCI) models has lead to him being invited to design, author and present a comprehensive amount of materials on a wide range of technology and futurist subjects. Jason has also been a pioneer in mobile marketing. He developed a large intellectual property portfolio that serves as foundation patents for many popular geo-location and image recognition mobile products and services. One product of his work, JAGTAG, which he invented and commercialized, was the only mobile 2D barcode solution that did not require the consumer to download an application prior to use. In 2011 AugmeTechnologies acquired Jason's patents including JAGTAG to complement their powerful tech portfolio. Jason also invented the Luci solar lantern. Luci is a lightweight, inflatable and durable LED lantern with a solar powered lithium polymer battery. Waterproof and collapsible, Luci is being heralded by the technology, design and non-profit industries alike. It was a top 10 at 2013's CES and has been featured in Engadget, TechCrunch, The New York Times, Boston Globe, Davos Summit, CBS news and on television around the world. Snyder co-founded MPOWERD the company that manufactures Luci to empower the developing world through solar power, providing equity to those without electricity. In addition to Luci, Jason is the named inventor on more than a dozen patents for new technology products related to social networking and information serving. He serves on the board of the Calyx Foundation and is an advisor to a number of other notable technology companies.