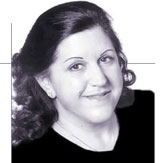 Diane Mermigas is editor-at-large at MediaPost.