After Google announced, in January 2020, that it would stop supporting third-party cookies in 2022, the industry reacted quickly, trying to figure out how it would compensate for this loss. Task forces were formed, new instruments were developed, many hands were wrung.

Which is why Google’s recent announcement that it was postponing its action until 2023 was met with a combination of consternation and relief. While many in the industry felt played, having pulled out the stops much more quickly and perhaps with less careful forethought than would have been the case had the timeline been longer to begin with, others felt they were off the hook, able to relax and go about business as usual since this delay might just be the first of many.

“Industry players 'should continue discovering options and understanding which are best suited for their business, which technologies to embrace, and how to do that.'”

The true reasons for the delay are both unknown and open to speculation. Google’s director of privacy engineering, Vinay Goel, explained that “We need to move at a responsible pace. This will allow sufficient time for public discussion of the right solutions, continued engagement with regulators, and for publishers and the advertising industry to migrate their services.”  Industry cynics, however, suggested that Google just wasn’t prepared to roll it out. Plans for its Privacy Sandbox as well as its ability to assign users to a group based on browsing habits—dubbed FLoC, for Federated Learning Cohorts—were not so ready for prime time that an early 2022 launch could work.

Good for Google, Maybe Not for the Industry

Regardless of the rationale, the move is clearly good for Google, buying it time to “get its house in order,” notes Umberto Torrielli, chief strategy officer of Silverbullet, a data and digital transformation company, and co-founder of 4D, the company’s Context Outcomes Engine. But is it actually good for the rest of the industry? Not, suggests Torrielli, if it causes publishers, brands, and agencies to take their eye off the ultimate goal: finding a way to effectively target consumers without third-party cookies.

“Google is just delaying the inevitable with this move,” says Torrielli. “By postponing this by a year or so, they’re just perpetuating fundamentally flawed technology.”

This sentiment was clearly echoed by ID5 co-founder and CEO Mathieu Roche, when he said, “The legacy identification system based on third-party cookies is obsolete and inefficient. Each time platforms match IDs with each other, the pool of identifiable users is reduced by 10-20%, creating lost opportunities for advertisers to reach their audiences.” In addition, Roche notes, “cookies are already unavailable on more than 30% of the traffic since they have already been blocked by Safari and Firefox. Marketers are missing out on the opportunity to address a considerable number of consumers.”

The focus on meeting Google’s initial target date has, in fact, made many observers keenly aware that third-party cookies were already past their sell-by date. The triple threat of consumer sentiment, privacy regulations, and the fact that competitors have already turned their backs on third-party cookies has meant that the insights claimed by those who championed cookies had to be found elsewhere.

Moreover, adds Torrielli, each of the solutions that’s been projected as a replacement “is better for the industry than third-party cookies ever were. They’re privacy compliant, they’re consumer-centric, and they provide better outcomes.”

While some industry players have indicated an interest in taking a breather, in maintaining the third-party status quo for as long as possible, Torrielli notes that “every agency, every brand we’ve spoken to since this announcement was made has said, ‘We’ve already set ourselves up to go down this path of figuring out how to mitigate for what’s coming next. We’re not going to pause now because Google is delaying it. We still need to figure out the solution.’”

“With this extra time, 'coming out of 2021, you have no excuse for not having a solution in place when Google eventually pulls the plug.'”

But the delay does buy some time. “Not everyone had lined up what they were going to do next,” Torrielli says. “No one had a finalized roadmap. They were all at different stages of having a more permanent solution. This gives us a bit more time to put things into place.” In fact, he says, many are saying, “Thank you, Google. Essentially, you’ve given us more time to test what will actually work for us as a business.”

Nonetheless, he points out, not all parties are winners. “Some tech companies might not want to heavily push this message,” he says, “since they still rely on third-party cookies as their foundation and haven’t figured out how to move away from that.” And DMPs, he points out, will suffer unless they can “future-proof” themselves by “thinking about transitioning to a CDP, which enables different types of use cases.”

Keep on the Path

Torrielli likens the move most of the industry has taken in response to Google’s original announcement to the movements of a freight train. “Once it starts moving in a certain direction,” he says, “it’s very difficult to change course. You just keep on going.”

The delay, therefore, “shouldn’t change the path people, the industry, different constituents, clients, and others have started to undertake,” he says. “They should continue discovering options and understanding which of these are best suited for their business, which technologies they should embrace, and how to do that.”

They should take the time afforded by Google’s delay “to fully vet the solutions that are available and piece together the perfect puzzle for how they’re going to approach the business in the post-cookie world,” he says. That means, he suggests, focusing on looking for solutions that drive outcomes, comparing and contrasting different partners, and taking a close look at specific use cases, different unified ID proposals, and the opportunity to focus on contextual solutions.” With this extra time, he asserts, “coming out of 2021, you have no excuse for not having a solution in place when Google eventually pulls the plug.”

Whether tools such as FLoC deliver what Google is promising is not really relevant to this argument, Torrielli says. “Whether or not it reaches a level that is acceptable and however it ends up working from an audience segmentation and targeting perspective,” he says, “you don’t know if the timeline is going to be adhered to.” More than that, he points out, “it’s just a piece of the puzzle. It’s not the full picture. You need to continue to move forward and understand what other solutions are going to be beneficial for you to adopt.”

To help pave the path forward, the next installments in this three-part series will look at expanding the ad tech ecosystem to broaden its scope and optimizing actionable insights to influence outcomes—all shaping the future of advertising. 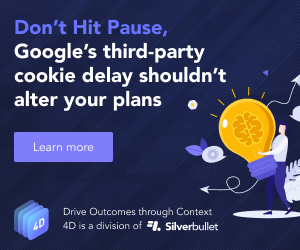