Graceful as a Swan: How a focus on “topics” provides a quick, easy, and elegant alternative to keywords

As we move, slowly, toward the inevitable cookieless future, many companies are just waiting it out, doing business as usual for as long as they can. Others are trying out a host of new ways to replicate the type of consumer information they’ll lose when third-party data goes away. But some are returning to one of the oldest forms of ad placement: contextual. “Think about newspapers in their heyday,” says Lucas Vicary, a strategic account manager at 4D, an outcomes-oriented division of Silverbullet, a data and digital transformation company. “If a brand wanted to reach, say, motorbike riders, they located their ads near motorbike content.”

For some fans of contextual, the logical way to approach determining context has been keywords. However, as many advertisers have painfully discovered, the problem with keywords is that there are so many of them—and finding them requires not only time but also a level of expertise in the field being advertised that often goes far beyond the knowledge base of most media planners. Most importantly, it isn’t scalable. As Vicary explains, “Keywords are very specific, and we quickly learned that it’s way too time consuming to find them all. As an organization, it’s just not scalable.”

What 4D has found to be more scalable, as well as quicker and easier, is what the company has called Topics (not to be confused with the recently announced Google Topics—same name, different philosophy, different approach). By narrowing the field to a handful of overarching terms, rather than hundreds of keyword options, “you can build out a segment in minutes, even seconds,” says Andrew Sims, also a strategic account manager at 4D. “You’re not reinventing the wheel. You can click into the UI, send it downstream, and go live.” Regardless of whether the ad is display or video, “this approach can mirror your strategy—saving both time and cost.”

Using this approach to determine contextual placement for a men’s grooming tool, for example, 4D focused on sports and grooming and, to a somewhat lesser extent, business, finance, and technology—all topics that would draw a male audience. In this instance, the CPG brand ran a 4D tag that collected media and URL data in a privacy compliant manner, helping them understand the type of contexts that perform best. The efficiency and power of Topics was demonstrated because the team was able to glean insights via the 4D tag on the best performing topics. 4D technology as Vicary notes, “is able to mirror these top performing topics.” What adding contextual targeting provided, he explains, was the ability to not only reach the audience the brand already knew was interested in the grooming tool, but also an incremental audience of readers the brand hadn’t previously identified.

The task was a bit more challenging for a client in the insurance industry since its audience—and their interests—were broader and therefore more difficult to pin down. This is an area, notes Sims, where the target audience is “everyone of a certain age who is living and breathing.” Given that, adds Vicary, it’s “better not to have to sweat over thousands of keywords covering every possible element. The keywords are too difficult to manage. It’s easier to stick to a handful of topics, across the relevant verticals.” These topics, which Sims says were chosen intuitively, included, “the obvious things, like automobiles, home and garden, family and relationships, babies, and marriage.” But then, thinking more broadly, they included “some Tier Two categories like healthy living, nutrition, and pets.”

Focusing on broadly defined topics took 4D a good deal of the distance, but also set the stage for a second, more granular approach. Once you start with the basic topics, says Sims, “you can net it out in terms of your goals and check the box of where the scale is, peppering in some additional keywords as you see fit.”

This proved particularly useful with an automotive client, Vicary explains. “They layered in such keywords as auto maintenance, SUVs, luxury, and hybrid electric vehicles. ”Once you have the tags applied and you’re getting learnings,” he says, “you can narrow in and see what’s doing well. You might expect, for example, better performance from hybrid electric vehicles, but instead find a stronger interest in maintenance. And that will help you focus for the next campaign. You’ll have a tag working in harmony with the topics.”

Once you start with the basic topics, “you can net it out in terms of your goals, peppering in some additional keywords as you see fit.”

An additional benefit of starting with broadly defined topics rather than narrowly chosen keywords, notes Sims, is that as 4D evolves into more of a self-serve platform, the ease with which “any client or user can come in and identify topics—rather than taking the time to brainstorm a full keyword list” makes the process accessible and scalable for everyone involved. Moreover, he says, it works better with the generally fast pace with which brands approach media decisions. “Topics are more digestible than keywords,” he says. “And then, if you get more granular below that, it’s like a swan sitting on the water with its legs churning underneath.”

FOCUSED ON THE PLACE, NOT THE PERSON

What makes 4D’s Topics different from Google’s Topics is 4D’s consistent adherence to context—and its avoidance of personalization. “We’re never targeting users,” says Vicary. “We’re just measuring the content. It’s all performance based. Every time someone reads or shows interest in the content, we can optimize toward that.” The idea, he explains, is “to be there in the moment. We’re focused on the right place, at the right time. We don’t know or track who is reading the content.” Moreover, while ads driven by third-party cookies often produce a mismatch of ads and content, with contextual targeting there is always a clear connection. “We’re trying to be nice to users,” he says, “and not feed them irrelevant ads. If they’re hungry, we want to show them Mars bars. If they’re not hungry, a Mars bar ad won’t work for them, even if they belong to a cookie pool of consumers that enjoys Mars bars.”

Pushing the Topics approach into the future, says Vicary, will mean staying on top of changing trends and understanding when a topic may have become redundant or need updating, such as, he suggests, trends in politics. “It will be increasingly important to understand what is changing, day in and day out,” he says.

In the meantime, as Google’s third-party data deadline approaches “more quickly than people realize,” Sims says, those who have gravitated early to the contextual approach will, he believes, “reap the benefits of being early adopters. It will be easier to go in, build out, provide scale, and activate campaigns” that are dependent not on people but on places. And by starting the search for appropriate content with Topics rather than keywords, Vicary suggests, “It’s easier to adopt because it’s easier to understand.”

In future installments of this series, we’ll look more closely at how Topics can elevate contextual targeting with video ads and what, specifically, marketers are looking for in terms of video context targeting. 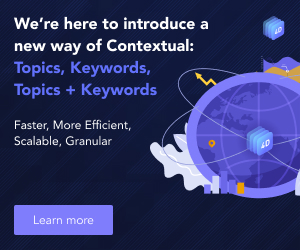