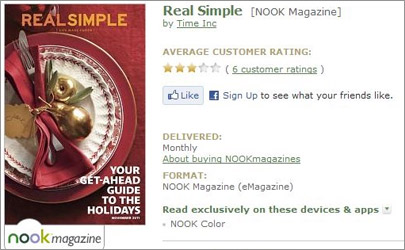 Barnes & Noble may have lost out on getting Superman and Watchmen on its Nook Color portable e-reader/tablet, but the company seems to have a firm hold on the women’s magazine sector. Bypassing the iPad for now, Time Inc.’s Real Simple magazine is launching its first full digital edition on the Nook Color this week. For a limited time at least, the November issue of the magazine is available only on B&N’s Android-powered device.

In a statement, Real Simple Managing Editor Kristin van Ogtrop says the demand was coming from readers. “Our consumers have been asking for Real Simple on Nook Color,” she says. Nevertheless, Real Simple will be launching on the iPad with the December issue, the company tells me.

With some exceptions, the magazine editions on Nook Color are closer to digital facsimiles than some of the more ambitious app magazines we have seen for the iPad. Most of the titles we have seen on the platform offer a page scrubber to navigate thumbnails of repurposed pages and hotlinks to features from the Table of Contents. One handy feature for the smaller 7-inch color touchscreen is an article reader view on many pages, which extracts text from a busy screen for easier reading. Real Simple offers a more enhanced Nook edition than most, with pages reformatted for the smaller screen and some items like recipes offering more interactivity within the page than other Nook pubs.

The Nook Color Newsstand has been a quiet giant in the field of digital magazines. While print publishers haggled for a year with Apple to get a subscription model in place on the iOS platform,  Barnes & Noble had an attractive Newsstand on the Nook Color. Readers can get 14-day trial subscriptions of most titles. The magazines and newspapers themselves reside in a separate area of the Nook interface. And subscriptions have been here all along. According to some reports, many magazines sell much better on this platform than they have on the iPad.

It is probably not a coincidence that Barnes & Noble and Real Simple made this announcement today. Apple is scheduled to launch its iOS 5 update to the iPhone and iPad operating system tomorrow, and it will finally include a Newsstand that manages subscriptions to print brand apps. Barnes & Noble also took a recent hit from DC Comics, which announced an exclusive deal to put its classic and current graphic novels first on the upcoming Amazon Kindle Fire. As we reported yesterday, Barnes & Noble retaliated against the DC Comics move by removing the graphic novels involved from retail store shelves.

Often underestimated in the tablet wars, the Nook Color helped demonstrate the market viability of a smaller, cheaper, feature-limited tablet, a path Amazon has chosen with its Fire model. Like the Fire, the Nook color uses a customized version of the Android operating system that gives access to select third-party apps. In fact, the Nook Color App Store now has over 600 apps available across a range of types.