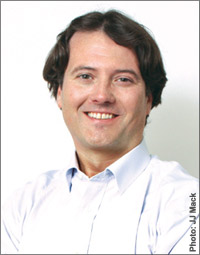 What did you learn from editing this magazine?

I don’t know if “learning” is the right word, but I was inspired. Certainly, you talk to Tim Kring about how some of the top Hollywood storytellers are thinking. I was inspired to talk to David Pescovitz, talking about, “You ain’t seen nothin’ yet,” as far as the information barrage goes. I was inspired by talking to Howard Rheingold about how we develop new norms of reciprocity when we’re working in all these horizontal groups. It just makes you so excited to see what the future actually holds.

What was the most surprising thing about doing it?

It was surprising how few people were comfortable with the idea that media is impacting human evolution. Everyone sort of characterized it as tools. But, Darwin, if you read his work, was really talking about the ability to adapt and adopt the tools as the key to natural selection.

Are you more optimistic or pessimistic now about the future of the human species?

Oh, I am far more optimistic. Now, I feel like the technology, in terms of how it’s being applied to storytelling, and commerce, and organizing into tribes, seems to be being driven more by the need to live a fuller life. And that just makes me more optimistic about what it is to be alive, and to adopt these new tools and, yeah, to lead a fuller life. So, I’m definitely more optimistic about where things are going and humans’ ability to adapt to the new conditions. Can I throw it back on you, dude? What do you think?

Fair question. I’m actually pessimistic about the long-term future of the human race, because I think media is hyper-accelerating the evolution of mankind, and that we’re going to become the missing link very soon. We’re going to move through this faster than any other species ever did before. We will become something else, because media is accelerating who we are so quickly.

Yeah, well Pescovitz, said, “You know, you can always just close your eyes.”

What was the most disappointing thing about doing this?

The most frustrating thing was trying to organize the available data to quantify the arguments. Specifically, we were trying to prove “Monahan’s Law”: that personal media creation is correlated with personal media consumption. We spent a lot of time talking about that in the issue and how that is impacting and changing us. And the point we wanted to make was: “Hey, don’t forget, as people are sort of moving through media, they’re creating ripples of content and trails and signals of their own persona, that are then being published to others.”

I wish we had somehow talked more about the implications of data on the future of media and marketing. I think we chose a device that was very human-centric, but so much of what seems to be impacting the craft of media and marketing is how people capture and harness data. If I had to do it over again, I would have found a way to touch on that topic somehow.