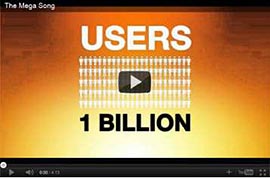 Universal Music Group made a bogus copyright infringement claim in order to suppress a clip touting Megaupload, the file-hosting site alleges in a lawsuit against the record label.

The clip, “Mega Song,” features a host of celebrities like Sean Combs, Kim Kardashian, Chris Brown and Will.i.a. endorsing Megaupload -- one of the cyberlocker companies that the Recording Industry Association of America has said is responsible for online piracy.

The Mega Song appeared on YouTube on Friday, where it quickly garnered more than 285,900 views, according to the court papers.

Several hours later, however, the clip was removed and replaced with a notice stating that it was taken down due to a copyright infringement allegation.

Megaupload disputes the copyright infringement allegations and argues in court papers that the takedown notices were “shams,” aimed at suppressing the endorsements. “UMG has chosen to sabotage Megaupload’s promotional campaign, effectively censoring our ability to convey our message with our own original content, including that a significant number of today’s top recording artists actively support our services,” Kim Dotcom, chief innovation officer of Megaupload, says in papers filed with the federal court in San Jose, Calif.

Universal said in a statement that the dispute is about the “unauthorized use” of a performance. “This is an on-going dispute that surfaced several weeks ago with respect to the unauthorized use of a performance from one of our artists. We heard from a number of our other artists (and their representatives) who told us they’ve never consented to being portrayed in this video,” the company stated.

So far, Universal hasn't clarified whether its complaint centered on copyright infringement or unauthorized use of a celebrity's name and likeness. But if the basis of Universal's complaint was a violation of artists' “right of publicity” -- that is, their right to control the commercial use of their image -- a takedown notice asserting copyright infringement would be improper, says Santa Clara University law professor Eric Goldman.

For its part, Megaupload says that it didn't violate copyright or the celebrities' right of publicity. Dotcom says in court papers that everyone appearing in the clip signed a release. Megaupload is seeking a decaratory judgment that it doesn't infringe copyright, an injunction banning Universal from asserting copyright infringement claims regarding the clip and monetary damages.