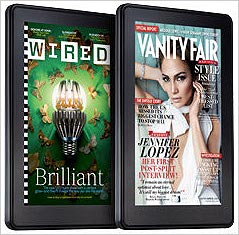 Amazon’s Kindle Fire devices will be getting an online software update over the next two weeks, in response to consumer complaints that the Web browsing is too slow and the touchscreen interface not responsive enough.

The upgrades will speed up the Kindle Fire’s Silk Browser, and will also enable users to edit the “Carousel,” a portfolio display showing recently used apps and browsing activity. No word on whether the upgrades will improve the device’s much-touted magazine-reading app, which tech pundit Jakob Nielsen dismissed as “miserable.”

The negative reviews of Kindle Fire’s magazine-reading capabilities were a blow to magazine publishers that pinned their hopes for even greater reach on the affordable new device.

The news of the upgrade comes as Amazon announced Kindle Fire is the online retailer’s top-selling item, at a price of $199 -- significantly cheaper than Apple’s iPad 2, the cheapest model iPad at $499. Overall Amazon said it has sold over one million Kindle units (of all kinds) per week for each of the last three weeks. This also includes the $79 Kindle, the $99 Kindle Touch and the $149 Kindle Touch 3G.

The American edition of the magazine may be defunct, but FHM is still raising eyebrows -- and tempers -- overseas. The December issue of the Indian FHM has ignited a firestorm in neighboring Pakistan, with a cover showing Pakistani film star Veena Malik posing nude, with the initials of Pakistan’s feared, mysterious Inter-Services Intelligence agency apparently tattooed on her arm.

The nudity, the perceived mockery of a national institution, and the fact that a Pakistani is appearing as the cover girl of an Indian magazine, have all combined to make Malik the target of fierce criticism in conservative Pakistan, where Islamists decry the creeping influence of secular ways and preach hatred of the country’s arch-enemy, India.

Malik claims, improbably, that she was tricked into the nude photo shoot -- a charge which FHM India denies. Pakistan’s Interior Ministry has vowed to investigate the matter.

GrindMedia, a division of Source Interlink Media focusing on action, sports, and adventure enthusiast publications, has acquired Baseball America, as well as its accompanying Web site, baseballamerica.com. Baseball America, founded in 1982, is published 26 times per year and also publishes a number of baseball guides and reference books.

Along with Slam, devoted to basketball, the acquisition is intended to broaden the company’s reach among male sports enthusiasts.

Say Media has acquired ReadWriteWeb, a leading technology publication, targeting high-level business influencers and decision makers. Say plans to expand ReadWriteWeb’s editorial scope to appeal to a wider array of technology consumers, while growing the advertiser base with the client connections of Say’s ad sales team. The acquisition will also give advertisers greater reach with influential, tech-savvy audiences. Say Media’s tech channel currently includes properties like Android and Me, Gear Patrol, gdgt, SplatF, and TechDirt, among others.