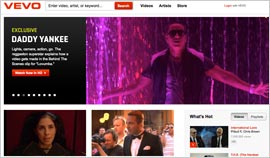 Who said the music video was dead?

Video music service Vevo said it delivered 827 million video streams to some 57 million unique viewers domestically in October. In November, Vevo accounted for 63.3 million unique visitors -- 7.6 million of whom went directly to VEVO.com -- according to comScore.

Worldwide, Vevo said it recorded over 3.6 billion video views in October, and estimates having reached 3.7 billion views in November.

Since its launch in late 2009, however, Vevo has reportedly paid out more than $100 million in royalties to songwriters, recording artists, record labels and other music copyright holders.

The popularity of the service, at least, seems to support such a contention. Vevo reported this week that monthly visits to the service have tripled from 104 million in late December to 305 million in October 2011.

Also of note, August marked the first month of official rankings for comScore YouTube Partner Reporting within its Video Metrix offering -- essentially offering a comparison of viewership across thousands of YouTube partner channels.

The data revealed that Vevo’s video music channel led all channels, with 60.6 million viewers. The second-most-viewed channel on YouTube, Warner Music, was about half the size, with 30.9 million viewers.

Overall, Americans viewed more than 5.6 billion video ads in August, with Hulu generating the highest number of video ad impressions at 996 million, according to comScore.