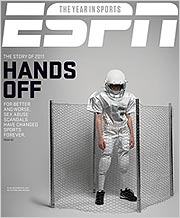 It was bound to happen eventually, with digital platforms exploding and print channels stagnating or declining, --and now it has. A number of well-known magazine titles are now generating larger audiences through digital distribution than print, according to the latest edition of Affinity’s American Magazine Survey, which tracks magazine audiences in fall 2011.

One of the most striking examples of digital success is ESPN the Magazine -- which, according to Affinity, attracted 11.09 million print readers versus 24.94 million digital readers this fall.

Previously, Affinity released data showing that over half of American magazine readers are accessing magazine content and advertising through digital channels. Out of 187 million American adults who interacted with magazine content and ads in the period covered by the AMS, 54% did so via the Web or mobile platforms, including smartphones, eReaders, tablets and other mobile devices.

However, 95% of the total magazine audience still consumes magazine content and advertising in print form, according to Affinity -- and almost half of the audience overlapped, with 48% consuming via both print and digital channels.

The Atlantic has posted its second profitable year in a row, the magazine reported this week -- boasting record-setting digital revenues, up 40% year-over-year, and a 2% increase in print ad revenues. Revenues from Atlantic’s new “Live” events division saw revenues increase 19% over last year. Overall, the company’s fourth-quarter revenues should be up 20% compared to last year, and its combined digital properties are attracting an average of 11.3 million unique visitors per month.

American Express Publishing has begun selling subscriptions to the digital editions of Travel + Leisure and Food & Wine for the iPad. The digital subs are available on Newsstand for $19.99 for an annual subscription, while single editions can be purchased for $1.99 through In-App Purchase.

Time is reviving the defunct Style & Design supplement, according to Folio. The new version of the supplement is scheduled to debut with the March 26 issue of Time, with a rate base of 500,000, targeting readers with an average household income of $125,000 or more. It will feature more content in areas including travel, cooking, and home furnishing. The original version of the supplement was published from 2003 to 2010, before it was closed in the face of continuing economic uncertainty.