The email marketing holiday season was a wild ride -- one that looked considerably different from past years and will surely set the tone for the 2012 holiday season. Here are some of the highlights that made this holiday season remarkable:

Retailers relied more on email marketing during the holiday season, especially early and late. Email volume continued to increase at above average rates during the holiday season, growing 20% during November and December compared to the same time period in 2010. Retailers once again extended Black Friday pricing and deals into early November as part of much better branded “Black November” campaigns. And email volume remained at or near the all-time high for three of the four weeks leading up to Christmas Day. 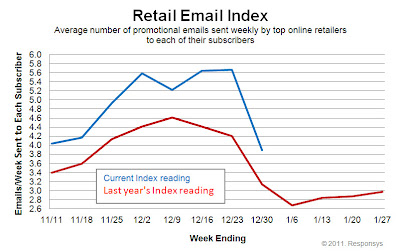 Thanksgiving Day is the new kickoff of the holiday shopping season. In 2011, 75% of major retailers sent at least one promotional email to their subscribers on Thanksgiving Day, making it the No. 3 email marketing day of the year behind Cyber Monday (No. 1) and Black Friday (No. 2). That was up from only 60% in 2010 and just 45% in 2009. This ncrease supported a huge leap in online sales, which rose 39.3% compared to Thanksgiving Day 2010, according to Coremetrics.

Big-box retailers opening their stores on Thanksgiving very quickly turned it into a highly promotional and hotly contested shopping day. This shift has been further catalyzed by the rapid adoption of smartphones and tablets, which has made it much easier for consumers to shop after feasting at grandma’s house. While some may bemoan the creep of commercialism into this family holiday, there's no putting the genie back in the bottle at this point.

Express shipping went mainstream on “Last Sleigh Day.” Retailers dramatically increased their messaging around express delivery in 2011, with email volume spiking on Dec. 21 when 74% of retailers sent at least one promotional email to their subscribers. That made it the fourth busiest email marketing day of the year, ahead of Green Monday (No. 5), the day after Christmas (No. 9), and Free Shipping Day (No. 13).

Retailers sent a very clear message in 2011 that the end of guaranteed Christmas delivery with standard shipping was no longer the end of the online holiday shopping season. With many retailers offering free or discounted express delivery options, they appeared to be setting up Dec. 21 as a “Last Sleigh Day” for Christmas delivery.

Free shipping is the most popular and effective online promotional offer, with consumers consistently valuing it more than it costs retailers to provide it. That’s why we’re seeing more and more retailers move to an “Every Day Free Shipping” policy, which is in turn forcing other retailers to keep up by offering free shipping more often, including for the duration of the critical holiday season. It’s also driving more retailers to offer free shipping with no minimum purchase, which a significant number of retailers did on Free Shipping Day, and to offer free return shipping, which is a small but growing trend.

Cyber Monday remains uncontested holiday champ. A massive 87% of major retailers sent at least one promotional email to their subscribers on Cyber Monday, making it the biggest email marketing day ever and the biggest day of the year for the fifth consecutive year. That was up from 77% in 2010.

Companies clearly recognized the value and importance of the email channel during the holiday season. My hope is that this recognition translates into the additional investments necessary to tackle the new challenges and seize the new opportunities that face email marketers in 2012.