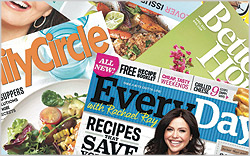 Smart acquisitions solidify Meredith’s clout in both print and digital

Meredith may be best known as the publisher of such long-in-the-tooth titles as Ladies’ Home Journal, Family Circle and Better Homes and Gardens.
But this Des Moines-based company is turning itself into a digital dynamo, re-engineering its relationship with readers and advertisers. It’s made our list because of its solidified position as a leader in cross-platform content creation and marketing solutions. It has made acquisitions and investments that enable it to better serve agency partners and brands now, and it continues to make moves that will ensure those decades-old titles have a valuable place on marketing plans for the foreseeable future.

In October, Meredith repositioned its integrated marketing division as Meredith Xcelerated Marketing (MXM), a unit that includes some of the more forward-thinking acquisitions in the publishing world. In the past few years Meredith has expanded its marketing capabilities with pick-ups including The Hyperfactory (focusing on mobile), Genex (digital), New Media Strategies (social media), and Directive (in part, to leverage the company’s massive database of over 85 million names). The acquisitions have been smart and well-integrated into existing properties and client services.

This fall the company also made a strategic investment in London-based Iris Worldwide, launching the Meredith-Iris Global Network — its reach now extends from Des Moines to Delhi and back again. “MXM possesses the optimal mix of services and innovation to benefit clients on a global scale thanks to our investment in Iris,” says Martin Reidy, president of MXM, which he accurately refers to as “a truly integrated client service engine.”

And Stewart Shanley, CEO and cofounder of Iris, welcomed the independent agency’s new partner, saying, “This is going to offer clients a real alternative to the traditional agency network model and one that is fit for the ‘always on’ world we now live in.”

Meredith has also been active on the publishing side, creating more opportunities for clients to connect with consumers, recently adding EatingWell and Every Day with Rachael Ray to its stable. According to Tom Harty, president of Meredith’s National Media Group, the additions give Meredith the largest reach with women who are focused on their homes, families, and personal development of any media company. Harty also points out: “Several of our key brands such as Better Homes and Gardens and Fitness have become among the most highly rated media brands on Facebook, demonstrating their relevancy with today’s multimedia, multitasking, socially-engaged female consumer.”

Finding new ways of reaching consumers and providing valuable content, of course, remains central to Meredith’s core. “We continue to build our brands across many platforms whether it is with new tablet products, Web video series, or mobile applications,” says Harty. “Each of these new platforms or brand extensions further deepens the brand engagement with the consumer, which is a key priority for our marketing partners.”

And Meredith backs up its impressive reach with industry-leading accountability practices. Under the Meredith Engagement Dividend Program — which grew out of a year-long internal study to measure ROI begun in 2009 in which purchases by consumers exposed to Meredith properties were measured against shoppers with no exposure — agency and brands will have some of the most sophisticated ROI measurement tools in the business, utilizing analytics from Nielsen’s Homescan system and Meredith data. Further, the program guarantees brands that advertise in Meredith magazines an increase in sales performance.

Mark Kaline, global media director of Kimberly-Clark (which has such brands as Kleenex, Huggies and Cottonelle and became a premier advertising partner and one of the first brands to sign on to the program) called the Meredith Engagement Dividend, “a breakthrough product for the magazine industry.”

Likewise Kelly Foster-Shapiro, GroupM senior partner, sees the initiative as “a step forward for the publishing business and accountability.” GroupM/Mindshare, Kimberly-Clark’s agency, will work with Meredith over the next year to measure and track performance for the brands participating in the  Meredith  Engagement Dividend Program. “We believe in print and its ability to drive business and are excited to be able to prove that,” says Foster-Shapiro.

“Based on our groundbreaking research,” boasts Meredith’s Harty, “marketers who invest in this program will receive an average improvement of 10 percent in the sales performance.”