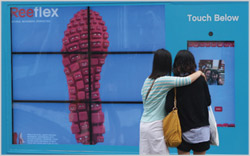 Out-of-home may be the oldest medium in the world. But to Posterscope, winning MEDIA’s out-of-home honors for the second year in a row, it’s also the most revolutionary. In fact, discovering new ways to integrate billboards, bus-stop posters, cinema ads and a host of other out-of-home media formats into the constantly evolving digital and social media landscape is one of the most important things the agency does, says Connie Garrido, its CEO.

“This is an opportunity to be a part of a larger, more consumer-centric media ecosystem,” Garrido says. “Media technology is all converging and we need to look at the interplay between bought, owned and earned communications, and see how out-of-home advertising can be interconnected.”

Posterscope has been making a name for itself by testing how advertisers can use the latest technologies in out-of-home and truly add value for consumers — and not just gimmickry. Last year, it won this award by conducting a test with client Nokia, using the mobile-phone marketer’s Point & Find augmented reality codes embedded in billboards throughout the city of Colchester in southeast England. Utilizing cameras in their phones, local residents were able to use the QR codes on the billboards to hyperlink to related content, and even to download apps utilizing a combination of image-recognition and GPS technology.

This year, Posterscope pushed its tech innovations even further, testing the prospects for use of near-field communication, or NFC technology, which enables consumers to touch their mobile phones to ads and download related content. The technology is in its infancy in the U.S., and so Posterscope conducted a rudimentary trial in which participants touched their phones to VH1’s bus-stop posters in New York and Los Angeles for the network’s Basketball Wives reality show, which enabled them to instantly download information about the show.

“The NFC campaign for VH1’s Basketball Wives was really exciting because it offered immediate, measurable results and we were first to market,” says Wendy Weatherford-Marks, VH1’s vice president of consumer marketing and promotion. “Posterscope recognizes all this powerful, new digital innovation happening in the OOH space right now and how it can deliver ROI like never before … that’s what I really like about them.”

By the second quarter of this year, phone carriers are expected to roll out new models with NFC capabilities, and Posterscope will then test for opportunities to use NFC to instantly purchase advertisers’ products or share on social media and possibly create additional forms of messaging, Garrido says.

This past year Posterscope also conducted a “location analytics plus location-aware” mobile survey, using GPS tracking embedded within mobile phones of willing participants, to track when they passed billboards of a certain advertiser and then visited a nearby location of that advertiser’s store. A subsequent survey of the participants asked questions about the brands they remembered and trips to the store they made as a consequence of seeing an ad.

Another test currently underway with various cinema vendors studies consumer interaction with in-theater experiential audience gaming, in-lobby digital interactive experiences and static in-lobby executions with mobile overlays. The goal is to make out-of-home advertising much more interactive and engaging, Garrido says.
Advertisers are not the only beneficiaries of Posterscope’s analytics: Media companies can also learn and adapt to the research findings, as one day virtually all out-of-home will be digital, Garrido says. “With all of our studies we can offer a new perspective to our clients, but we also have to educate and embark on relationships with media owners, to show them opportunities in investing in media, enhancing their real estate with new technology,” she says. “That way, they can see the value and not feel that the new technology is going to cannibalize the traditional poster, but enhance it with rich and new uses.”