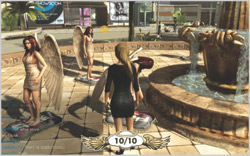 For years, the big question in interactive advertising has been that of scale. Can the industry deliver ads to more than just a few pockets of homes here and there?
When BrightLine is in charge, the answer is clearly yes. In 2011, it created a campaign for Degree for Women that scaled across 90 million homes, representing the largest interactive ad campaign to date, running on satellite, Xbox and VOD. And since opening its doors in 2003, it has steadily become the go-to shop for innovative and wide-reaching iTV campaigns.

Its specialization in iTV has helped the agency to dominate and also lead that market, and it now counts 65 clients on its roster, reading like a who’s who in marketing: Unilever, Cisco, GlaxoSmithKline, American Express, L’Oreal, Kellogg’s, Red Bull, PepsiCo and McNeil/J&J are all on board. BrightLine has executed over 300 iTV campaigns since its founding, but it’s doubled its client roster in the last two years alone. These new clients are coming aboard for the agency’s innovative campaigns. For example, BrightLine designed Unilever’s first-ever fully branded game for AXE, a brand known for experimentation and pushing boundaries. From the PlayStation home screen, viewers could earn AXE-branded prizes, including AXE body spray, for their PlayStation avatars. And gamers could also perform moves in a branded environment, says Jacqueline Corbelli, BrightLine’s founder and chief executive. “This prize made the first-ever branded move in PlayStation home possible, allowing gamers to perform a pit-pit-chest move with the Excite deodorant,” she says, referring to the moves that allow the avatars to apply deodorant in a particular fashion. (BrightLine’s AXE work has run on PlayStation in more than 20 countries.)

This sort of innovation has been a cornerstone of the company since Corbelli founded it in the playroom of her home back in 2003. “BrightLine has a history of leading iTV advertising with a litany of firsts,” she says, “from the first-ever viral VOD experience for AXE back in 2005, to interactive recipe experiences that custom tailor the right recipe for the viewer based on personality profiles, to the first customizable film experience enabling viewers to choose what direction the main character takes next.”

To make sure it can keep achieving those firsts, they’ve added funding. This year, it landed $30 million in investment money from the private equity firm JMI Equity, earmarked for strategic growth.

JMI isn’t the company’s only fan. “We think that BrightLine offers a unique solution in the advanced-TV marketplace,” says investment banking firm Needham & Company, in a recent report. “BrightLine works with the largest global advertisers to solve these problems within the TV environment by bringing one of the key competitive advantages of the Internet to TV advertising — data.”

While predictions vary widely on the size of the iTV ad market, the research firm Parks Associates has pegged the iTV market to potentially hit $4.3 billion by 2014. And scale is indeed a critical issue. The key is making sure the interactive ad programs can be accessed across platforms, such as satellite with DISH and DIRECTV, telcos with Verizon FiOS and AT&T U-verse, and connected-gaming consoles such as PlayStation and Xbox, she says. (BrightLine has created campaigns for cablers, but finds, in general, that cable’s technological capabilities are not as advanced as others.)