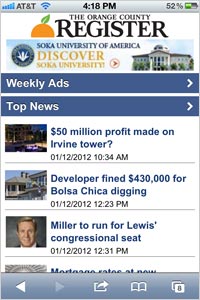 As publishers construct mobile distribution strategies that are at least as fragmented and varied as the mobile platforms themselves, this will be tough to measure. With many media brands working on a range of apps and mobile sites, they need to come to the ad market with a reliable number that also reflects the true reach they can offer a marketer.

Not surprisingly, one of the industry standards for verifying the measurement of analog and Web media has stepped into the new mobile frontier. The Audit Bureau of Circulations issued its first “m.Audit” designed to account for the metrics of a publisher’s mobile Web and app presence. ABC, of course, has been one of the standards across newspapers and magazines. In this case, the ABC was verifying the numbers for the Orange County Register newspaper, which includes an OC smartphone app, the OCRegister.com mobile site, orangecounty.com and OCVarsity.com.

The fundamentals of the audit reveal just how powerful mobile has become, even on the local level. The mobile Web site drove 4.5 million monthly page views, and the mobile app served another 2 million stories. In the mobile Web, using the “unique Browser” metrics, the OC brand was seeing between 600,000 and 700,000 a month, which likely translates into audience reach. Interestingly, the app had a much smaller reach -- to 24,000 devices. But the level of content consumption in the app was multiples higher than on the Web -- between 70 and 80 articles a month read versus 6-7 on the mobile Web site. The audit covers three months ending in September 2011. The full report is available at ABC.

The Register says it has been selling mobile advertising since 2009 -- everything from SMS alerts to banners, custom site development and mobile SEO. They have seen their mobile traffic double in a year.

I have heard a lot of people in the print industry say they look upon mobile as a “second try” at digital. Many of these brands saw the Web eat their lunch, especially with portals and vertical content startups that were infinitely more adept at generating traffic quickly. Content categories and local online media that traditional brands believed they should “own” on the Web often got taken first by companies that no one had ever heard of five years before. Worse, print suddenly had to compete on the same platform with TV and radio, which have both proven enormously effective at promoting their own URLs.

Mobile should be that second chance. While every new medium indeed creates its own new endemic brands, the space available to them here is literally narrower. Magazines have already made a serious play for the tablet, and local newspapers like the Register clearly took to heart the lessons of 15 years ago. Don’t get caught behind the curve on this one.