When You Come To A Fork In The Road, Put It Down

Consider what you had for breakfast this morning. Was it organic granola with low-fat plain yogurt? A bagel with cream cheese on the run? Taylor Ham, Egg, and Cheese on a roll? Biscuits with sausage gravy? Five cheeseburgers?

Chances are, if you regularly have much more than the first one, it might be an indication that you could be in the 68% of Americans who are defined as being either obese or simply overweight by the Centers for Disease Control. But only 10% consider themselves that way, according to MRI. (And, yes, if you had each of them this morning, you are the poster child.)

So why is there such a massive disconnect?

The CDC set the definitions for being overweight and obese based upon Body Mass Index (BMI), which is calculated using a person’s height and weight (see this link for more). You can be in one of four categories – Underweight (BMI below 18.5), Normal (BMI 18.5 - 24.9), Overweight (BMI 25.0 - 29.9) or Obese (BMI 30.0+). MRI’s determination of being overweight or obese is simply self-reported, associated with “having treated” the condition.

The easy explanation for this body image vs. reality chasm is that most people have no idea what their BMI is, let alone what the scores mean in terms of their weight class. But a more important consideration in this discussion is in public health and targeted messaging. If knowledge is power, then simple awareness is the first step to making real improvements in people’s lives.

In terms of getting that awareness out to market, there’s one sure-fire way to hit that target: television. This is particularly true for those who self-report as being obese or overweight. They tend to, well, over-consume TV. Nearly compulsively so. A quick look at their viewing profile in MRI shows that they tend to over-index on nearly every title, genre, daypart, network and special that is broadcast. The only notable exceptions that they really don’t tend to watch are rather specific: “Gossip Girl,” “The Cleveland Show,” “The Office,” “One Tree Hill,”and most sporting events – other than figure skating, gymnastics, the X-Games, and NASCAR.

The “Diet Control” group is a bit more discriminating with their television choices – that is, they’re slightly less likely to watch everything on broadcast television. But since they reflect a more active lifestyle, they also tend to watch more televised sports. Other than auto racing, that is.

The more sensitive component of this obesity disconnect is in the messaging itself. Ask any husband what the correct answer to “does this [item of clothing] make me look fat?,” and you’ll know that there is none. Now apply that same dialogue to most of the country, particularly when the majority of the country thinks it looks good. Talk about your classic "kill the messenger" scenario.

The reality is that a majority of those who are likely diet plan users aren’t the ones who truly need them. They’re upscale, more A/B county, better-educated, Caucasian, female, probably between 45 and 65 years old, and less Southern than the actual obese and overweight profile would suggest. The obese and overweight profile is nearly a polar opposite. So if you’re in the diet industry, the marketing quandary becomes whether it’s better to target the likeliest customer or the sufferers who truly need the products and services. And those might just be the ones who are most likely to reject the message as for “other people.”

One of the more surprising aspects of this situation is how it plays out so geographically. On a state-by-state basis, there’s a stark contrast between those states that are more likely to be home to the “clinically” overweight/obese and where they actually consider themselves as obese or overweight. A third group, those who have taken action to control their weight with some sort of diet plan, have a completely different geographic profile. Only three states overlap: Kentucky (the only state to be found to be both overweight and consider themselves overweight), and Virginia and Nevada both think they’re overweight and are likely to have used a diet plan as a result. 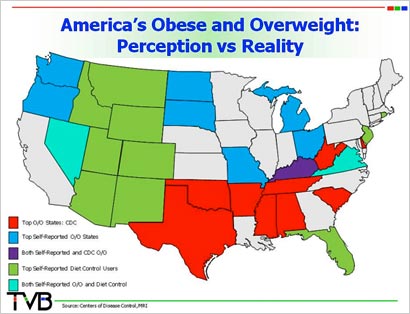 This might be a cautionary tale, not of “fishing where the fish are,” but of “fishing where the fish like the bait.” So while it might be socially responsible to market diet plans to those customers who reside in “America’s Gravy Boat” – the outcome would probably be more altruism than actual sales results. Jenny Craig would be hard-pressed to compete with Grandma’s recipes in an area where regional cuisines are endemic to a way of life.

And perhaps that’s the most effective way to go about customizing the message – through their passions for their local and regional foods. Since there is such a geographic skew to these two sides of the dieting coin, spot television could easily be employed to deliver very locally targeted, high-impact messages to those markets most at risk. It’s certainly worth the marketers’ while – they benefit most from having a bigger customer base, not a bigger customer.

These are consumer barriers that are deep-seated. But it’s a high-value customer for the healthcare industry – and one where the consumer bears even more of the risk than the marketing executive.

This is a one target that’s more in danger if they’re missed than if they’re hit.