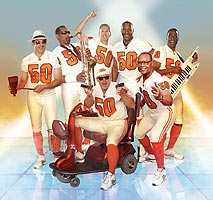 That spot, like other Super Bowl ads, soon appeared on a host of Web sites. But not everyone was happy to see the ad online.

Renaissance Marketing Corporation, a Chicago company that says it licenses the 1985 Bears Shuffle, recently sued AOL for allegedly infringing copyright by posting the ad on Fanhouse. Renaissance says in its court papers that it never gave AOL permission to use the music in the ad.

Although Renaissance granted Boost Mobile a license, it was only “for the limited purpose of using it in a television commercial,” according to the complaint, which was filed last week in the Northern District of Illinois.

Renaissance argues that AOL profited from the clip by using it to garner viewers and by surrounding it with other ads. The Chicago company also says it asked AOL to take down the ad in August, but AOL didn't respond until November. The clip is no longer available on Fanhouse, which is now controlled by Sporting News (As of Wednesday, the Boost Mobile 2010 Super Bowl ad also had been taken down from YouTube, but appeared to be available elsewhere.)

Even if the allegations are true, AOL might have a defense to the lawsuit, says Internet law expert Venkat Balasubramani of Seattle. He says that Boost presumably expected that the ad would be widely viewed when it licensed the music. “Assuming this is the case, and either the agreement or the conduct of the parties allowed for broad distribution of the commercial, AOL will probably argue that the use was implicitly authorized under the license.”

He adds: “There is certainly an argument to be made that in today’s age, commercials are expected to be widely shared and distributed.”

AOL declined to comment on the lawsuit. A Boost spokesperson likewise declined to answer questions about its license with Renaissance Marketing.

Renaissance filed a copyright infringement lawsuit against Viacom last year over the 1985 Shuffle video. Court records show that the case was settled.