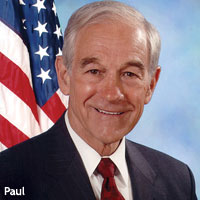 A federal judge has rejected a request by presidential candidate Ron Paul to immediately unmask the creator of a video clip that Paul says defamed him.

In a ruling issued this week, U.S. Magistrate Judge Maria-Elena James in the Northern District of California ruled that the politico hadn't met all of the procedural hoops for obtaining the information on an expedited basis.

The ruling was without prejudice, which means that Paul's campaign can amend its papers and try again.

The dispute dates to Jan. 4, when a Twitter and YouTube user with the screen name NHLiberty4Paul uploaded a video that attacked former Republican presidential candidate Jon Huntsman as a “Manchurian candidate.”

The clip, titled “Jon Huntsman's values,” intersperses poses questions like “Weak on China? Wonder Why?” and “What's he hiding?” with video footage of the ex-U.S. Ambassador to China candidate speaking Chinese.

Paul promptly disavowed the video. Two weeks ago, his campaign filed a federal lawsuit alleging that whoever uploaded the clip infringed Paul's trademark and engaged in false advertising. The complaint also alleges that the clip defamed Paul by portraying him as “unscrupulous, xenophobic and underhanded.”

James rejected that request because the campaign didn't provide enough information to show “good cause” to issue such an order on a speedy basis. James said that the campaign could try again, but must spell out why its entitled to the expedited order. Among other factors, the campaign must specify why it believes its legal claims will hold up.

It's not yet clear whether Paul's floundering campaign will refile the request. Should the campaign do so, the case could test the limits of people's right to engage in anonymous speech online.

In general, judges are protective of people's right to speak anonymously about political matters, and to create political parodies. But if this clip contains statements that are “outright misleading,” the uploader might not be able to remain anonymous, says Internet legal expert Venkat Balasubramani.

“It depends on the context and whether the campaign is able to argue that the accounts (and statements) were misleading, and whether the posters can make some sort of parody argument,” Balasubramani says in an email to Online Media Daily.