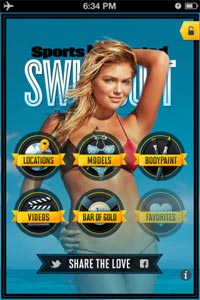 The annual Sports Illustrated Swimsuit issue is the magazine franchise that just never seems to let up. The publisher reports this week that 2012 proved to be another banner year for the issue’s digital extensions. In addition to attracting a record 34.5 million video views in the last week, it also quickly dominated the Apple App Store. The freemium SI Swimsuit 2012 app was downloaded 482,000 times in its first week.

While the company did not provide absolute numbers on upgrades to the $6.99 full access version, it did say that the number of paid upgrades this year was equal to the number it saw last year -- although the price of getting all the content more than tripled, from $1.99 to $6.99.

The app has even called attention to last year’s entry. So while the 2012 app is currently #1 in the Sports category, the 2011 version has revived and now sits at #10. This echoes the back-issue effect many magazines see in their tablet editions in the Apple Newsstand. Publishers have been reporting surprising numbers of back-issue sales.

The tablet edition of the Swimsuit issue is itself worth mentioning. As is its custom, SI has a sales team that works hard to integrate sponsors with the special issue by using some of the models in ads and creating creative programs that extend the spirit of the issue. In the tablet edition of the magazine, there may be more enhanced ad units than I have ever seen in a single issue of a tablet magazine.