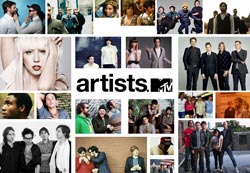 In a bid to regain its supremacy as the dominant medium for musicians to connect with fans, MTV is returning to its musical roots, albeit online. The move, unveiled late Thursday during a presentation at the SXSW Music Festival in Austin, includes the launch of a new online destination -– www.artists.mtv.com -– which combines MTV-produced fan pages with ecommerce features that will enable everyone from headliners to garage bands to have an MTV-branded presence online.

The effort effectively shifts MTV from a mainstream focused curator and promoter of top musicians to one that encompasses the long-tail, and in the process, it hopes to gain millions of new online user audience impressions that it will sell to advertisers, and will even split those revenues with the artist.

“We’re building this for, and with, the artists,” says Shannon Connolly, vice president-digital music strategy for the MTV Music Group, who said it will expand MTV’s focus from about 10,000 mainstream artists to more than 1 million.

“This is for garage bands as much as it is for Lady Gaga,” she says, adding that in some ways MTV is simply returning to its roots by leveraging the best current media technology to connect fans with musicians.

But she also acknowledges that it is an effort to regain lost ground that went to other online media, especially social networks like Myspace and Facebook and commerce platforms like iTunes and Google Music -- and noted that it’s not simply a promotional platform, but a material “commercial partnership” between musicians and MTV.

The commerce takes several forms, including merchandising, ad revenue sharing, and even some tacit licensing and representation.

On the merchandising side, MTV is partnering with Top Spin, a major commerce platform that already has been used by bands for years to sell products directly to fans. Connolly says MTV still is working out terms of the deal, but that it would only take a portion of the 15% that Top Spin historically takes from the artists, because the goal is to create new revenue streams for the artists. She says the artists pages will also include a “tip jar,” with 100% of those revenues going to the artists.

On the ad revenue side, Connolly says MTV is still figuring out what the proper “rev share” model is, but that once it is set, it will be a uniform cut applied to all artists, not just big or small ones.

She says the goal is to also help bands make connections with brands, which could lead to music licensing deals and other brand-related content marketing.

The main goal, however, is to help online users discover and connect with musician that go well beyond the kind of promotion MTV’s TV channels historically played in the past. Toward that end, the new artists’ site will also integrate with MTV’s TV channels, throwing their mass media weight behind one artist a month. That effort, dubbed “Full Frontal,” will turn over all of the useable “inventory” on MTV, VH1 and CMT networks to one band, including integrations with some of MTV’s most popular TV series.

“The value of getting your song on ‘Jersey Shore’ is incredibly powerful,” she cites as an example.

Connolly says MTV already has begun discussing sponsorship opportunities with a few advertisers, but that the real goal is to create a better online experience for musicians and their fans by providing one “comprehensive and centralized” place to find everything about the best established, new and up-and-coming performers. It all revolves around the individual artists pages, which she says “will be awesome, even if the artist doesn’t claim them.”