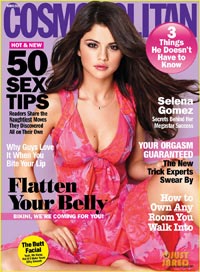 'Cosmo Latina' Launches In May

Cosmopolitan, the iconic women’s lifestyle magazine, is launching a Hispanic-focused, English-language version, Cosmo Latina, in May, per Adweek, which reported the news earlier this week. Cosmo Latina aims to attract beauty and fashion advertisers looking for a platform to reach young, bilingual and bicultural Latinas.

Self-identifying bicultural Latinos (of both genders) make up 39% of the total U.S. Hispanic population, according to the 2011 edition of Horowitz Associates’ annual Focus: Latino report. That works out to about 19.5 million people, or 6.3% of the total U.S. population.

Overall, the U.S. Hispanic population, which is estimated at 50 million by the U.S. Census Bureau, wielded $1.1 trillion in spending power in 2011. This is expected to increase to $1.6 trillion by 2016. Bilingual and bicultural Latinos, who tend to be better-educated on average, likely account for a disproportionate amount of this spending power.

This growing population is critical to future profitability for big advertisers, according to a recent study commissioned by the Association of Hispanic Advertising Agencies and performed by Santiago Solutions Group. The study found that marketing efforts targeting Hispanics are correlated with overall revenue growth for consumer packaged-goods companies and CPG-based retail companies.

Cosmopolitan is enjoying success on a number of fronts. Long one of the bestselling magazines at print newsstands, over the last year the magazine became the first Hearst Corp. title to attract over 100,000 digital subscribers.

Time Inc. has retained Bain & Company “to offer further perspective on market and consumer trends” as the company attempts to identify new areas for growth, according to CEO Laura Lang. Lang also revealed a number of personnel changes: Steve Sachs, executive vice president for consumer sales and marketing, is leaving the company, as is Stephanie George, executive vice president and CMO.

Conde Nast is releasing more specific information about tablet readership to advertisers, with regular information covering each issue of every title with a digital edition, according to Ad Age. The information, which should become available to advertisers within 10 weeks of digital publication, will include the number of tablet subscriptions and single-copy sales, open rates for the tablet edition, and the amount of time spent with the digital magazine by readers. Advertisers that pay extra for premium ads can get more information, including how many readers accessed the ad, the number of times it was displayed, and average time spent with the ad.

SI Goes Major At The Majors

The Sports Illustrated Golf Group is pooling its resources to create a multiplatform coverage juggernaut at The Majors -- the golf championship quadfecta consisting of the Masters, the US Open, the PGA Championship and the Ryder Cup. The effort includes a dedicated studio to create online video content, live-blogging by SI contributors, online Q&A’s with editors, and of course a wealth of content for the print and digital editions of Sports Illustrated, Golf and SI’s Golf+ supplement. Visitors who drop by the SI editorial compound can get free golf lessons or listen to writer roundtables about the events.

Laura Petasnick has been named vice president for integrated sales at Martha Stewart Living, the flagship publication of Martha Stewart Living Omnimedia. Before joining MSLO, Petasnick served as publisher of Rodale’s Prevention and Prevention.com; prior to this, she served as advertising director at Conde Nast’s Vogue, with responsibility for the beauty, health and auto categories.

Fitness is looking for the country’s best fitness lifestyle bloggers, whom the magazine will recognize in its first Fitterati Blogger Awards. Winners will appear in an upcoming issue of Fitness and be invited to contribute to Fitnessmagazine.com. Readers can visit www.fitnessmagazine.com/blog-awards to cast their ballots for their favorite blogger, or nominate one. Blogger nominations will fall into one of six categories: Best Healthy Living Blog, Best Running Blog, Best Healthy Eating Blog, Best Motivational Blog, Best Personal Trainer Blog, and Best Weight Loss Blog, with two winners in each category -- reader’s choice and editor’s pick. Voting is open until April 12.

The Parenting Group, which publishes Parenting and Babytalk and Parenting.com, has formed a strategic advertising and content partnership with VolunteerSpot.com, a Web-based platform that simplifies volunteer sign-ups, making it easy for parents to get involved and stay involved in their children’s school and other group activities.

The partnership brings VolunteerSpot together with Parenting’s Mom Congress on Education and Learning. Under the terms of the agreement, VolunteerSpot.com will join the Parenting Network sites targeting modern moms, allowing The Parenting Group to offer VolunteerSpot.com ad inventory as part of its digital media packages. The two sites will also exchange and cross-promote each other’s content throughout all of their respective digital platforms.