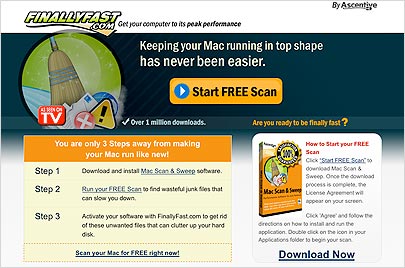 Software vendor Ascentive has agreed to pay $9.6 million to settle a class-action false advertising lawsuit alleging that it used pop-ups and other online ads to trick consumers into purchasing unneeded programs.

The agreement provides that consumers who purchased the software will be able to put in claims for either $10 or $18, depending on how many products or services they purchased. Ascentive also promised to revise its disclosures to consumers as well as its refund policies. The attorneys who filed the case will receive slightly more than around $1 million.

Ascentive didn't admit wrongdoing as part of the settlement agreement.

If approved by U.S. District Court Judge Petrese Tucker in the Eastern District of Pennsylvania, the agreement will resolve a "scareware" lawsuit that dates to January of 2001, when consumer Douglas Ledet filed a class-action lawsuit alleging that Ascentive "falsely identifies computer problems and characterizes them as 'severe' in an attempt to scare consumers into purchasing its software."

Ledet asserted that the Philadelphia-based company advertises that its software will diagnose computer problems, but instead secretly installs an application that sends pop-ups warning users they have spyware. The ads allegedly recommended that consumers purchase the software for $29.95 to rid their computers of spyware and other problems. What's more, he said, Ascentive doesn't sell the software, but licenses it to users for one year and then renews people's subscriptions without adequate notice.

The company did not respond to Online Media Daily's request for comment.

In a separate matter involving Ascentive, last year the company agreed to pay $78,000 and also issue refunds to Washington state residents to settle an investigation into deceptive advertising practices by the Washington Attorney General.

Ascentive, which didn't admit wrongdoing as part of that settlement either, also agreed that it will not "deceptively" misrepresent to consumers that their computers are at risk of running slowly unless they purchase Ascentive's software.