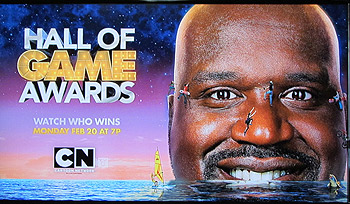 Getting web- and gadget-crazed boys to commit to watching a televised awards show is a challenge on part with getting them to sit still for more than three minutes at a time. To lure this sporadically attentive
audience to its Hall Of Game Awards Show, which aired February 20, Cartoon Network turned to NBA and NHL arenas. There, the network set up booths and "kids zones" and gave away Hall Of Game rally towels, often with the assistance of kid-friendly mascots like the Milwaukee Bucks' Bango. It also sponsored a Mites On Ice mini-game during the intermission of a Phoenix Coyotes contest.