MOST ORIGINAL PAIRING OF OOH ADVERTISING WITH VENUE: Inwindow Outdoor and Vitro, ASICS: Run With Ryan 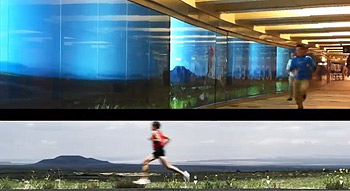 ASICS had sponsored the ING New York City Marathon for so long, and with enough success, that it set out in 2011 to do something entirely unique. And so it was that, prior to the race and during the weeks that followed, commuters in Manhattan's Columbus Circle subway station found themselves staring at a 64-foot-long video wall, which flashed images from the city's five boroughs and then a clip of marathoner Ryan Hall running the length of it at his usual marathon pace (read: really, really fast). It wasn't uncommon to see commuters attempting to keep up. And failing horribly.