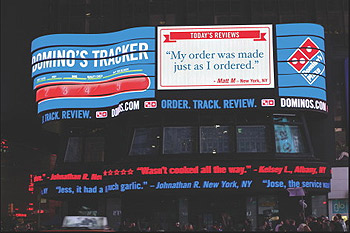 Domino’s Pizza Tracker has been a popular feature on the company’s Web site for some time. It’s a simple design with a big purpose: to track your online pizza order from the time the order is submitted to the time it arrives at its destination. The campaign took the pizza tracker idea a step further. Domino’s ran 30-second commercials asking customers to leave their comments on the pizza tracker. Then, the comments, both good and bad, were displayed on a billboard in Times Square while a live stream of the ABC Supersign ran online.