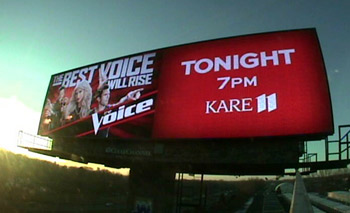 In early February, NBC set out to dominate the day after Super Bowl Sunday. Dubbed "Day of Digital," Kinetic, working with NBC and Maxus, identified over 300 digital out-of-home screens to supplement existing advertising efforts. The result gave the network the share of voice across all mediums. That Monday, digital out-of-home advertisements for "Smash" and "The Voice" went live across major markets. That day, "The Voice" was the number one show and the "Smash" premier came in third.