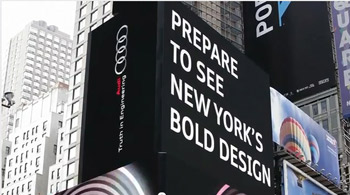 When Audi launched its brand-new A7 model at the New York International Auto Show they decided to go big. Utilizing a 15,000 square foot billboard with over 17.7 million viewers, Audi's A7 went social. The billboard was located in Times Square and passersby could interact with the design via QR code or text message. Users were invited to comment, tweet and check-in at bold locations in order to tie in the theme of the car's bold design.