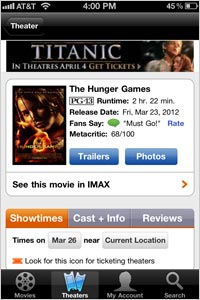 Mix a youth-oriented, ravenously awaited film blockbuster with the medium of choice for a new generation and you have a record waiting to be broken. With the premiere of “The Hunger Games” last week, the mobile and online movie guide and ticketing service Fandango set a new record for its mobile ticket sales over the weekend.

The last blockbuster to set that mark was “Harry Potter and the Deathly Hallows, Part 2” last year. “Fans have given it our highest ‘Must Go’ rating, with Web and mobile ticket sales still going strong on Monday,” Fandango EVP and General Manager Rick Butler stated yesterday. The ticketing service polls users on their response to recent films, and found that 62% of the “Hunger Games” fan base planned to see the movie more than once.

Mobile helped drive Fandango to an overall personal best for the weekend. In addition to record mobile sales, the company says that 22% of all ticket sales for the new movie came through its advance ordering system.

This is the largest share of movie tickets Fandango has seen in the dozen years it has been in business. The scale translates to about 17 tickets sold a second. March 23 marked the single best selling day ever for the company, beating the previous record for the opening day of the 2008 “Dark Knight.”

Fandango is present on almost all mobile devices, including iOS, Android, BlackBerry and Windows Phone 7. It claims over 30 million visitors each month across Web and mobile. In recent months the company has initiated a paperless ticketing model that bypasses the box office altogether and shows a QR code receipt for m-payment to the ticket taker just before entering the theater.