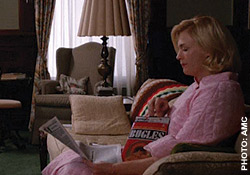 To paraphrase Allen Ginsberg’s “Howl,”  I saw the best minds of my generation destroyed by madness, starving hysterical naked, and/or fat suits so grotesque that their characters turn into the Macy’s-Parade-balloon version of themselves.

That’s certainly true for Betty, the former Mrs. Draper, who was never a great mind, to be sure, but managed always to hold on to her huge beauty and Grace Kelly-like style. And since John Hamm (who plays her ex, Don Draper) directed this episode, I’d say that while they are divorced in their fictional roles, there’s also perhaps some previously undiagnosed tension in their offscreen relationship, as well? Talk about pounding on her character!

Really, I know “Mad Men” is full of surprises, but who could have predicted that within eight months, Betty the perfect Breck girl (she of the cigarette diet during her character’s third pregnancy) would turn into a physical mixture of Happy Rockefeller and Rosemary Clooney? There weren’t enough Bugles manufactured worldwide to fuel that kind of weight gain. (Come to think of it, Grace Kelly put on some poundage by the end of her life, too. But she was at least 20 years older than Betty by then.) 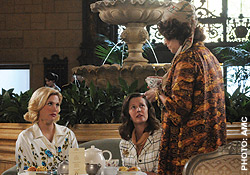 Of course, the actress January Jones was pregnant in real life (and this episode had to be filmed before the opener to give Hamm time to prepare.) But all that porking up reminded me of the grotesque fat suit that Weiner gave the now-lithe Peggy when she was pregnant and didn’t know it. Everyone in the office made fun of her, and at the time it seemed to be a suit of armor to repel sexual advances.

It’s all deeply disturbing and queasy-making. What I object to in “Tea Leaves” was the uneasy mixture of contempt for fat and the blameless diagnosis of cancer.

But in that new funereal home of theirs, the Grande Betty seems to get a reprieve from death. “It’s benign,” she says, as she looks up from the phone at Henry, her loyal second husband. But her seeming numbness at the news soon turns to frustration as she complains about her fatness.  Henry shouts “I don’t see it!”

If there was a theme in this episode, that’s it: more important than the ability to read the tea leaves is the ability to see what is right in front of you. Or as Cecilia (the creepy turbaned faux-gypsy tea leaf reader who approached Betty in the restaurant) put it, it's having "the gift of sight." 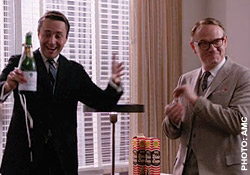 Other themes: death (literally or figuratively, and Henry does mention being Scrooge looking at his tombstone) and being replaced.

Feeling pushed-out and publicly humiliated by Pete after the Mohawk plane unveiling, Roger gets blinded by rage, and says, “When is everything gonna get back to normal?”

The answer, obviously, is never; the new normal is always a tad trickier than you think, especially with the radical changes to come during 1966 and onward.

On the “everybody’s replaceable” theme, the brazen Michael Ginsberg, whom Peggy interviews for a copywriter job, has lots up his sleeve (in addition to his resume.)  Her current art partner, Stan tells her as much; to him it’s clear as day that the new man will be Peggy’s boss, pronto, just as Joan predicted that Megan would be made a copywriter and Faye said Don would be married within a year. 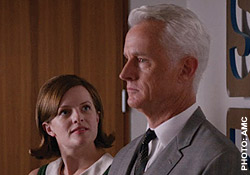 Peggy, however, is a believer in challenges.  In the end, however, Peggy's Pollyanna-ishness didn't matter, because Roger went ahead and told the Mohawk client about Michael before she even had a chance to hire him. Roger says he needed to "smooth the way for the Jew."  But he needn’t have bothered. "Turns out everybody's got one now,” the ever-old-school Roger says to Peggy. “Tell you the truth, it makes the agency more modern, between that and it's-always-darkest-before-the-Dawn over there.” (Don’s new African-American secretary was hired only as response to a competitive screw-up, not “on purpose,” as Roger says.)

I couldn’t stand Ginsberg, who seemed as stereotypical a Jew as Pauly Walnuts is an Italian. In his manic energy, and grating accent, he reminded me of the insult comedian Jimmy Barrett.

Even though they’re not related, the new kid lists the poet Allen Ginsberg on his resume. I got the idea that for the writers, just bringing in the  ghost of Alan Ginsberg  suggests darkly prophetic  rants  (after “Howl,”his second most famous poem is called “Kaddish”  a Jewish death prayer) and easy connections to the emerging downtown hipster zeitgeist. 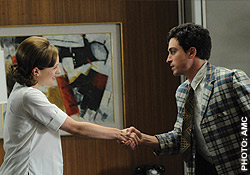 The poet Ginsberg favored thrift store clothing (albeit not as glaringly mismatched as Michael’s clownish madras jacket and paisley tie.) He also lived on the Lower East Side in a “cold-water flat” similar to the railroad apartment they show the new copywriter going home to. (Fun fact: Allen Ginsberg coined the phrase “flower power.)

By the late 1960s, the Lower East Side was attracting artists, poets, musicians and broke druggies. The elderly Jews’ kids had for the most part moved on to either large project buildings or to Brooklyn and Queens; the richer ones went to Long Island.

In his craven and manipulative interview with Peggy, SCSP’s new copywriter told many whoppers about his background (like Don?)  The biggest lie was that he had no family. “Nobody in the world cares I got the job but you," he tells her.

Still, I wasn’t prepared for the Dad straight out of “The Jazz Singer” (“I hef no son!”) Michael’s grandparents would have been the ones with the accent; or another explanation would be that the father was a Holocaust survivor. In that case, he would most likely live in Washington Heights or on the Upper West Side, not in the kind of Lower East Side apartment with the tub in the kitchen depicted here. (Weiner grew up in California, the son of a neurologist. But still, the show is so well researched and detail-perfect that it makes me think something strange is going on here, especially since the guy talks about buying prostitutes one minute and solemnly prays over the kid the next. ) 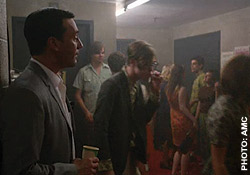 Also strange was the father’s outfit, right out of a play about social justice in the 1930s, and the fact that he towered over the son. (Height differences usually went the other way in that generation.) For now, I’m going with the “Do not judge, let ye be judged,” line.

But while I’m judging, when are the agency partners going to fire that ineffectual and rude Bozo, Harry Crane? Really, how many screw-ups will it take? (And would a woman in his position who flaked out that many times be allowed to stay on to her job? That’s not even a question: remember that Joan was great at the job, heads and shoulders above Harry, but wasn’t allowed to keep it.)

In the meantime, he's great for comic relief. Though the backstage scene at the Rolling Stones concert seemed fake, the story that Harry signed the wrong group was hilarious, as was the scene in the car with Harry scarfing down 20 White Castle burgers. (Although his hostility toward his wife and marriage is not fun to listen to.)

Did Don’s foray there prove that he’s tuning more into his almost-teenaged daughter, Sally, and is worried for her?

Sadly, (but right in character for a narcissist) when Betty had to think about the future with cancer, she didn’t worry about what would happen to her children. Rather, she was worried about no one hearing a good word about her. I did like the moment between her and Don, when he reassured her, calling her his old pet names, Bets and Bertie. 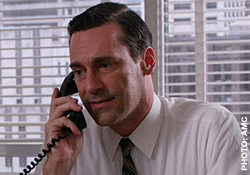 Don made a joke in the last episode about the Francises’ new Addams Family-style house. But inside, it really looks like a mortuary.  Also, could they have made a bigger contrast between Don’s light, bright, happening new apartment and this old, formal, dark place?

Some things come up again and again: the writers’ fixation with chairs, for example. A few seasons back Betty was angry at Don’s unwillingness to fix a broken chair in the dining room in time for her party. This time, she dreams about the scene of the family without her, and Sally turns her mother’s chair over and places it on the table. (In his little black suit, Bobby looked like Eddie Munster, but I’m mixing ‘60s TV monster comedy shows metaphors.)

There’ve been a lot of references to Betty’s eating disorder as well. (Although the term didn’t exist then.) A few seasons back, when grandpa Gene was still alive, Sally told him that her mom would not allow ice cream before dinner. Gene tells her, "She's afraid you're going to be fat like she was... Her mother used to take her to town and then make her walk home. I put a stop to that."

So the idea that Betty offers Sally ice cream before dinner was breakthrough -- is Betty getting warmer and less rigid? But there seems to be no joy in the offer for Sally. She leaves at least half and stiffly asks her mother if she can go watch TV. (In the old days, her mother used to order her to do that.) Betty eats both her and Sally’s parfaits. That’s why I’m thinking that Betty actually lied about the diagnosis.

Because her life is a mess, and, reading the tea leaves -- or just seeing the truth -- at this point is just too hard.