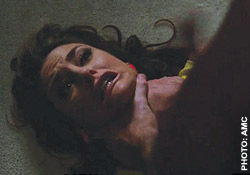 Wow! I thought “Mystery Date” was easily the best (if the most visceral, violent and upsetting) episode this season so far. “Haunting” just doesn’t cover it. As with the symbolic landscape in such fairy tales as Hansel & Gretel, or Little Red Riding Hood, the woods are scary, dark and deep. And Don had miles to go before he slept -- and/or strangled someone, whichever came first.

As always, MM is about identity and duality, interconnections and strange bedfellows.  In this episode, about crime and fairy tales, Don, for one, was part Sleeping Beauty, and part Beast, a sweaty, phlegmy, hairy Beast, at that.

There were beaucoup de Cinderella references, mostly made in connection to the shoe account SCDP picked up.  (Almost comically, all the decisions about the female footwear were being made by men.) More importantly, the reverse scenario resonated throughout the episode, with women giving up on the prince and standing on their own two feet.

Joan finally puts her foot down, sending her hubby with the rapist tendencies out the door once and for all. Peggy puts her feet -- her stylish, green-shod feet – up on her desk, the way Roger or Don would. And Megan tells Don to stop smoking and go home.

The use of the actual commercial for the game “Mystery Date,” (“a Milton Bradley game!”) was a killer way to set up some of the threads of the show -- waiting for rescue from Mr. Dreamy, who often turns out to be less than a prince. The other was the literal symbolism of the opening and closing of doors. The black-and-white spot opens with a jingle and a super-excited  ‘tween girl opening a door, squealing,  “He’s here, my mystery date!” Then we see whether said date is a “dream” or a “dud.” 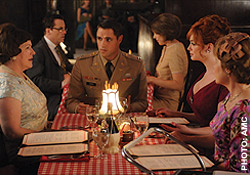 In a horror-movie-like moment, Peggy walks down a long, empty hallway late at night while alone in the office, and opens a scary door.  (She finds Don’s secretary Dawn, who can’t get home to Harlem, trying to sleep behind it.)   No gentleman, Joan’s officer husband Greg becomes a wolf, saying : “Open this door or I’ll kick it down!”

Don’s literal dream date, who looks like a combination of all the past mistresses in his life mixed with Ann-Margret, just happens to show up at the front door of his swanky apartment as he’s home napping. He shows her to the back door (or rather, the service elevator, because she was there to service him.) I was so relieved to learn that it was all (or mostly) a dream, when the single red shoe was no longer next to his bed, I shrieked with relief.

But back to the basis of the episode: blood, and the scarily named Richard Speck, the crazed drifter  responsible for a “massa-cree”--  as our favorite lesbian photo editor, Joyce, (wonderfully played by Zosia Mamet) put it. On the evening of July 14, 1966,  the hideous Speck just showed up with a gun at the door of the makeshift Chicago dormitory/townhouse  in which nine young nursing students were living. He savagely attacked and raped them, and then either strangled or shot each young woman, one by one. (One survived by hiding under a bed.).

Perhaps the extent of the gruesomeness, and the way the sexual violence was methodically carried out, was impossible to process at that point, a time before “CSI” and “Law and Order/SVU.” But it was a bit of shocker that everyone in the room saw the pictures as objects of titillation to be passed around and gawked at. The excited reaction almost equated unspeakable death and violence with X-rated sex.

Surprisingly, the voice of reason came from “Ginzy,”  the new writer who until this point seemed totally sketchy. 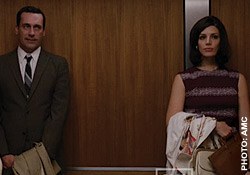 “Eight girls trussed up like a side of meat. You sickos!” he said, pushing the photos away, the only person in the room to point out how offensive it was to human dignity to gape at mutilated corpses. Could it be that he is a son of a Holocaust survivor, so he is sensitized to pictures of human devastation? (And the next cut is a shot of Joan, with her malfunctioning oven!)

In the opening of the show, Don is in an elevator with Megan and runs into this previous paramour, who starts flirting and calls him “my bad penny.” Megan is fed up, and Don is guilty and scared about losing his new life, which leads to his fevered dreams.

But in reading about Richard Speck’s background, I couldn’t help but think there was a parallel to Don’s -- and maybe that’s why they gave him a dream strangulation scene.  Both grew up on farms in the Midwest, lost parents at an early age, moved around a lot and lived with abusive stepfathers.

Don’s past as Dick Whitman is the source of his inexplicably bad, self-defeating behavior – but he made good. Whereas  Richard Speck was a brain-damaged drunk and drug addict who went from petty thief to full-blown, conscience-less monster. In the late ‘90s, a tape surfaced of him in jail. He explained that strangling someone is tough. "It's not like TV... it takes over three minutes and you have to have a lot of strength."

Considering the past that Don is up against, let’s hope that his fevered dreams scared him straight – so, as he tells Megan the next day, “You don’t have to worry about me.” 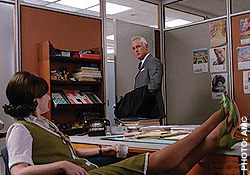 Peggy has two wonderful scenes:  she’s now blackmailing Roger for cash in the office, and keeping up with him, joke for joke.  Roger, inexplicably, has failed to get a campaign going for his only client, Mohawk. And he lies to Pete about it. So he brings his problem to Peggy and asks her to get it done over the weekend.  He solves it the only way he knows how—by giving her cash from his pocket. But she knows how to hustle more money out of him, saying  “Work is $10. The lie is extra.”

Dawn’s visit with Peggy mirrored the time Bobbie, Don’s older woman paramour, stayed with Peggy to hide, and tried to give her advice. This time, Peggy is the older, more experienced one. And Elizabeth Moss does a great job of playing inebriated, (including the perfect little hiccup) “Y’all drink a lot,” Dawn says, smiling.

Peggy tells Dawn that she, Peggy, was also Don’s  secretary, and that they have to stick together -- she knows how hard it is. But she’s too self –absorbed and/ or drunk to notice that she’s not giving Dawn a chance to talk. And that her background is not similar to Dawn’s -- as a white woman, Peggy is much more privileged.

Preparing to go to bed, she sees her green purse (filled with Roger’s filthy lucre) out on a coffee table next to Dawn’s makeshift bed. She wants to take it, but still has that reflexive thing of not wanting to appear racist, so leaves the bag out on the table. This is the reverse of the time Lane took the wallet from the black cab driver. 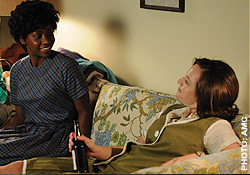 It’s interesting the way Weiner allows architecture to affect the story: when Don went out to California and stayed with the original Mrs. Draper, Anna, in her sunny, gingerbreadish bungalow, we also had a fairy tale-esque, hallucinatory scene. This time the big, dark Goth house that  the Francises bought provides lots of jokes and story lines.

Poor Sally is stuck there while her mom is away, and Bobby is away at camp (still bed-wetting, poor kid!) being babysat by Henry’s mother, who also gives those Bugles a workout.

Finally, we understand where her son’s creepy pregnant belly-rubbing comes from. Pauline is nuts.

When Sally refuses to eat her tuna fish sandwich. (“It has relish in it!” ) Pauline’s not having any of it. She slaps Sally and tells her to sit there till she finishes the sandwich, crusts and all.

But Pauline is also devouring the newspaper, licking her chops over the salacious Speck story. Though at first she tells Sally the story isn’t for kids, eventually lovely Stepgrammy Pauline (sitting there with a giant meat cleaver in her hand) finally gives in.  “Those girls got ready for bed. There was a knock on the door, and a handsome man was watching them from afar,” she says. Mystery Date!

“All those young, innocent nurses in their short uniforms, stirring his passions,” she says. Way to blame the victims!

“Why didn’t they run away?” Sally asks, legitimately. 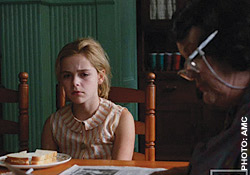 After some intelligent probing about Pauline’s background (Sally asks, “Was your mother strict?”) Henry’s mom tells her that her father once hit her so hard, he sent her flying across the living room saying “That’s for nothing -- so look out.”

Sally says that wasn’t nice. Pauline responds that it taught her a valuable lesson. Yes, how to abuse the next generation, and the next.

How much damage can Pauline do? Well, she literally shoves something down Sally’s throat --  half a Seconal. (Last week, she advised Fat Betty to go to the doctor and get diet pills, aka, speed.)

Betty and Henry come home to find Mama racked out on the couch, and Sally out underneath it. (Can she hide from harm and save herself, the way that nurse did? Doubtful. )

In the end, the thing that creeped me out, that I didn’t really understand, was Ginsberg’s unselling of his clichéd campaign to lure the clients in with a Cinderella story instead. He tells it in a hypnotic way, but it’s sinister: Cinderella is “hobbling like wounded prey. She’s scared and feels a hand on her shoulder.  She takes it. She’s knows it’s not safe but she doesn’t care. She wants to be caught.

The music over the credits is “He Hit Me (It Felt Like A Kiss),"  a pop song written by Gerry Goffin and Carole King and recorded by The Crystals under the guidance of Phil Spector in 1962. The specter of Phil Spector rearing his freakishly bewigged head is a whole Goth story in itself! The song was yanked off the air, for obvious reasons.

But it provides the perfect ending for that inspired overhead shot of Joan’s new reality: the triumvirate of herself, her baby, and her mom all sharing a bed. Joan can’t sleep.