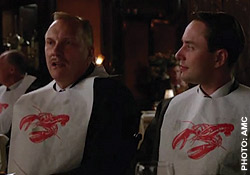 You have to admit that the announcement  “He was caught with chewing gum on the pubis!” is a new one, a big surprise no matter what you think of the season so far. Don had earlier suggested that you’d need a cold shower after driving the new Jaguar. But who could possibly come up with a fix for that post-wad-o’-Doublemint predicament?

“Signal 30” was slow at times, but deeply layered, and had its fair share of surprises.  Who ever expected Pretty Boy Pryce to put up his dukes and proceed to make rum steak out of Pete “The Weasel” Campbell’s face, right there in the conference room? I’ve never seen a fight scene seem simultaneously so weird and poignant; it appeared to stop time without being in slow motion. That’s what I call a show-stopper.

The episode opens with, and gets its title from, a grisly 1959 film about car accidents, which Pete is watching as part of his driver education class. That is fitting, since almost every man in this episode is a car wreck, excluding Don. (But his new wife is in the driver’s seat, big-time.)And Pete’s a man without a license. 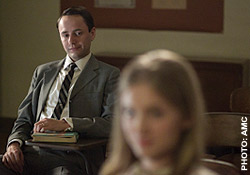 Yes, the Gangs of SCDP are almost paralyzed. Props to Matt Weiner and John Slattery (Roger) who directed this episode, for finding a literal way of showing the concept of bruised male egos. No one could man up enough for this episode, and  both Lane and Pete ended up in (excellently acted) red-faced humiliation.

Again with the issues of identity and duality, Matt Weiner? Yup, plus we get lots of forebodings of that year-round MM staple, death!  What a lovely noose Don was doodling!

But the best new added twist comes from “account man” Ken Cosgrove’s  latest fiction: it tells the story of a robot fixing a bridge that united two different planets. He loosens a bolt and everybody commuting from both sides of the bridge plunges to their death. 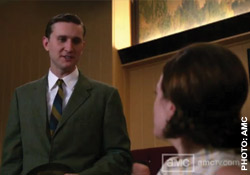 Megan is living somewhere between actress and wife/writer. (And I don’t trust her!) Don is somewhere between Dick Whitman and ad exec Draper, and between his two families. The Jaguar guy’s wife is living in Manhattan now, but wants to be a hog farmer. With Lane and Pete, we get two men with Daddy issues going at it.

Let’s approach it man-to-man: (but not necessarily Englishman-to-Englishman, the way Lane bungled the Jaguar deal.) Lane is one freaky fellow. And the fact that we saw his father beat him with a cane last season certainly set him up to defend his manhood with his fists after being insulted and called a “homo” by Pete, the wicked son. (By the way, that was one of two allusions to homosexuality. The other one was when the Madam thought Don was sitting the session out because he played for the other team.)

But back to the fight: the way Lane  took his 19th-century English-public-school stance for the fight was so old-school it was  hilarious; then Joan’s icing warmed up the wounded warrior enough for him to go in for a brutish kiss (gasp!) which she handled with aplomb. (I must say it lasted a few seconds to0 long,  and I was worried.)

But pugilists Lane and Pete are more alike than they know: they’ve both cheated on their wives, and generally don’t treat their spouses well; each feels underappreciated at work (Lane feels like a fraud, whereas entitled but unloved Pete is outraged by the lack of acknowledgement, craving it most from his father figure, Don.) Outside of work, each feels like a stranger in a strange land: Lane with his new allegiance to New York City and the U.S.; Pete with his new family life in the suburbs. 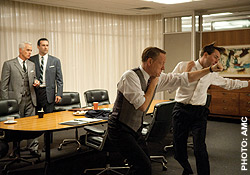 And that’s where Pete has become the evil (or shadow) Don. Slinking in the back door late at night, lying, drinking, cheating, disrespecting his wife, Pete’s going all  Donny Darko lately.  A few  seasons back, Trudy and Pete lived in a mod high-rise apartment while Don was in a big house in Westchester, and now it’s the reverse. The dinner party scene was wonderful, complete with Pete, who is obsessed with size and his lack thereof, showing off  his HUGE stereo unit, which could accommodate even Wilt Chamberlain! Less funny was the coffin idea. I guess those things were the flat screens of their day.

The point was really made that Trudy is putting down roots in Cos Cob (where there aren’t any Greenbergs!) and turning back the clock.  When she was living in the city she was a fashion plate --now she’s in a tight-waisted, big skirted floral dress  (Earth Mother?) while the other women are in modern, narrow sheaths. And the house is pure 1950s, similar to the set Lucy and Ricky used when they “moved” to Connecticut.

Yet reality knocks, even if Trudy doesn’t want to let it in. The dinner party guests bring up the latest specter of terrifying violence in the news, only weeks after Richard Speck’s massacre: on August 1, 1966, an ex-Marine sharp shooter climbed to the top of a bell tower at the University of Texas with a cache of guns and ended up killing 17 people. It was a genius job of interweaving history into the episode: before shooting from the tower, Charles Whitman, as he was named, killed his sister and his mother.  His father was a strict, abusive man who owned a plumbing business. Drip. Drip. Drip.

Though he didn’t want any part of the evening in the beginning (just as Lane tried to get out of the “football” engagement with his wife)  Don really warmed up. He even corrected a guest on the sniper’s last name: Whitman. (I was wondering whether Weiner chose that name originally as Don’s alter ego because it would resonate in the ‘60s.) At dinner, Don was so forthcoming that he  admitted he grew up on a farm with an outhouse, about as far away from Pete’s upper-crust upbringing as you can get. 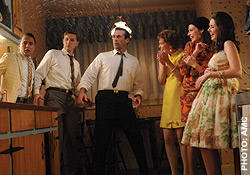 So let’s get to the symbolism and imagery of the faucet. Pete, (whose mother was a Dykeman, remember!) is a fish out of water outside Manhattan. Previously, the kitchen faucet drip was driving him crazy, (Trudy didn’t hear it) and he got up in the middle of the night to fix it.

Then the water exploded out of the faucet in the middle of the  dinner party; in the male swagger department, turns out Pete hadn’t fixed it-- he only made it worse. Don tamps it down, and then dramatically takes his shirt off to finish the job with the right tools, with the women swooning and calling him Superman.

Pete’s emasculated and pissed; not only can the new, scared-straight robo-Don tamp down the faucet, but he can also resist the charms of the prostitutes in the upscale brothel they go to with the would-be Jaguar client. (That was kind of depressing, to learn that all it took to be a great account guy was to know the best brothels.) Roger leaves with a Joan look-a-like, while Pete needs to hear that he’s a “king” in order to perform.

When he and Don share a cab on the way home, Pete’s all angry and paranoid (for a change), acting like he took one for the team.  He points out the sudden hypocrisy of Don being on his “high horse” (whorehouse Don on his high horse!)   But Pete’s like an alcoholic who thinks everyone is watching him drink. Don gives Pete the same advice he gave Peggy long ago in the hospital: “Go home, take a shower, and forget this happened.”  (He forgot to add, “‘You grimy little pimp!”). Don is behaving well, and tells Pete he should think about what he has to lose. 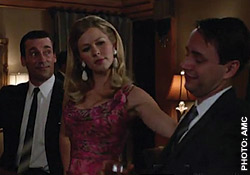 There was more Pete-Don imagery  in the driver’s ed scenes. In previous seasons, we’d seen Don, all suited up, sitting in a student desk in a classroom. Pete’s leering at an innocent young high school girl, who tap tap-taps her flowered flip-flop, very much the way the faucet gets Pete’s attention in the following scene. But Pete’s leering at a much younger woman (to deflower?) reminded me of Don’s Maypole scene, when he was ogling the teacher and pulling on the grass, alas. (More opposites now: Don was concerned for the young woman he met back stage at the Rolling Stones concert, while Pete wants to show off and take the girl to the Bronx Botanical Gardens, which his tony ancestors helped to found. But he is pushed out of the way by Handsome (heavy-handed much?)

After Pete drops off Don in the cab ride, he tells the driver he’s going to Connecticut. “You have to pay both ways,” the driver says. Pete responds, “I’m aware of that.”

The final scene is really sad, with Pete, whipped from the fight, crying in the elevator and going home early. “I have nothing now,” he tells Don. 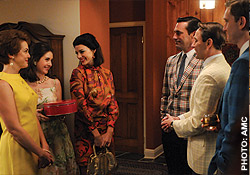 The voiceover is of Ken, reading from his latest story. Undeterred by Roger, he’s now using the nom de plume of  Dave Algonquin (a name Dorothy loves, natch, and which was also mentioned by Pete at the party when he said Cos Cob meant “briefcase in Algonquin.”) He’s given up science fiction/fantasy, and instead writes  poetically about Peter’s life. (This was a similar ending to Jon Hamm’s reading from “Meditations in an Emergency,” to close season 2.)

Pete mentioned his gun at the dinner party. He said he needed it to shoot “varmints.” I have a bad feeling that the subject of the Bronx Botanical Gardens (a great burial ground) will come up again before Pete fights his way back to sanity.

mad men, tv
5 comments about "Episode 505: 'Signal 30': Fixing the Drip, Or The Punishment Of The X-Y (Gene)".
Check to receive email when comments are posted.
Read more comments >
Next story loading