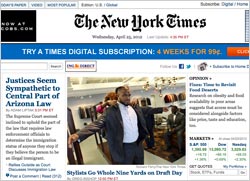 The average number of daily unique visitors to newspaper Web sites also increased, growing 10% to 25 million in the first quarter of 2012. Total reach was basically flat at just below 64% of the total U.S. adult Internet population.

The total number of minutes spent on newspaper Web sites increased about 6.9% from to 12 billion in the first quarter, according to the same data. Over this period, the number of page views increased 1.4% to 13.17 billion. The average number of visits per visitor edged up to 9.77 per month.