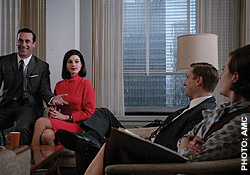 Last week’s jaunty episode, “At the Codfish Ball,” got its name from a Shirley Temple movie in which the pint-sized star struts her stuff. Whereas this week’s opus, “Lady Lazarus,” refers to a Sylvia Plath poem about suicide and the Holocaust. Hello, Mad Men!

So it’s no surprise that this latest installment, written solely by big show-daddy Matthew Weiner, seemed a bit more hollow and unsettling than last week’s epi-palooza. Perhaps that’s what Weiner was going for: that we feel the emptiness that Don feels, now that Megan has, like a lady Lazarus, resurrected herself as an actress. His joy and security blanket have, overnight, been ripped from him, and now he’s staring into the abyss. (That empty elevator shaft he peered into once Mrs. Draper left the office seemed a bit too obvious, right?)

Tellingly, the episode ends with beautiful shot of an empty living room, which, given Megan’s new life, is now more of a stage set than a home.

Still, “LL” was cleverly loaded with allusions to downfalls and head games.  SCDP gets the Head Ski client, Don and Peggy go to see the “head” of desserts, Don listens to psychedelic Beatles’ music at the end, which offers, as people used to say in the late ’60s, a “head trip.”

And in other “Mad Men” news, a bunch of hollow men lose their footing. 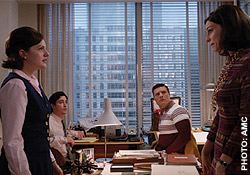 But the fun parts came with the fake stuff. First there were the suggestions of fake Beatles songs and the hilarious names of all the faux-moptop groups, like the Merseybeats and the Zombies. (And the story within the story of whether to pay for the real thing, which apparently Matt Weiner did, royally  -- $250,000 -- for the use of  “Tomorrow Never Knows.”)

The whole Beatles setup was very telling. The Chevalier Blanc client wanted  a commercial parodying  the “chaos and fun” of “A Hard Day’s Night” which had come out at the height of Beatlemania, in 1964. But, as Don found out by the end of the episode, even two years later, the Beatles had moved from lighthearted to dark pretty dramatically. Megan told him to listen to the most difficult, and psychedelic, song on the Revolver album -- which apparently John Lennon wrote after tripping on LSD and reading from “The Tibetan Book of the Dead.”

The song had nothing to do with the client's spot (which seemed to parody the idea of a Hai Karate ad from the time showing a guy being attacked by frenzied women, with the tag line “Be careful how you use it."). Really, Megan could have suggested a far less dangerous Paul McCartney song from that album,  “Good Day Sunshine,” but that wouldn’t have brought up the old guy/young woman dissonance now inherent in their marriage.

While we’re on the subject of music, Don asks, “When did music become so important?”  I took it that he meant buying actual songs and not making up advertising jingles. It seems to me that the trend of buying the rights to actual pop music wasn’t widespread until the very late ‘70s or early ‘80s -- when Ford used music from “The Big Chill” to introduce the Taurus and appeal to Baby Boomers, right? And the use of indie music in ads picked up steam in the mid- to late ‘90s. Agreed

But back to fake (the very basis of advertising?), I loved everything about the Cool Whip introduction, a product literally made out of air and chemicals, so phony it required a new designation, that of a “dessert topping.”  The first riff, between Megan and Don, was magic. And then the pretend pitch by the pretend couple (Don and Peggy) in the pretend kitchen went off with quite a few hitches.  The juxtaposition was brilliant. 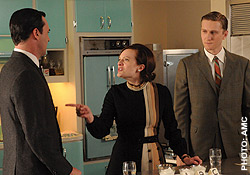 Afterward, Peggy tells Don to shut up and stop blaming her for Megan’s leaving. Peggy was right; she did spend time training Megan, and the whole working-with-the-boss’-wife deal, to begin with, put Peggy in a ridiculously unprofessional position.

But the reality was that she was as ill-equipped to sail through those lines with Don as Pete is clunky with the skis. Sadly, Peggy needs to grind it out; she’s a workhorse, and Megan’s a thoroughbred racehorse (to use a rather sexist analogy!). Megan is indeed one of those “girls who is good at everything,” as Peggy said.(And I thought from the original story line that Megan might end up as Mary Wells, who also married well and had a theatrical background.)

Megan even cooks barefoot. The stew she was making was Boeuf Bourguignon, a recipe from Julia Child’s “Mastering the Art of French Cooking,” which was what all sophisticated hostesses were serving at the time. The rest were mastering the art of Clarence Birdseye -- with good reason; the Julia version, at least, required a total prep and cook time of five hours! Don tastes the dish (it’s too hot), but then Megan doesn’t have time to share a main meal or even a dessert -- she has to run out to a nighttime acting class

I must say that Ginsberg’s reaction to learning that Megan was leaving to be an actress was strange. He asked whether she got the clothing and shoes for free. It had Holocaust overtones to me. Likewise, when he reacted so violently to the fake Beatles song from the ‘30s. It seemed to hit a nerve in his Martian background. 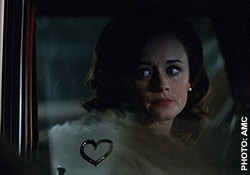 For an episode that seemed empty on the surface, there really is too much to chew over here. But let’s get to Pete Campbell, the great entitled one and master of self-sabotage.

The show opens with Pete on the train reading “The Crying of Lot 49” (a piece of fiction from 1966 that brims with literary references.) But more importantly, just three lines into the opener, there goes Pete, talking suicide! (And he sure does cry a lot in this episode.)

Can we talk about Pete and his side dish? The whole thing was creepy and infuriating. Insurance agent Howard is pretty repulsive when he brags about the hot side dish in his Manhattan apartment who’s 24. Turns out his main dish, his wife, is Alexis Bledel, the quite gorgeous (and no longer adolescent) Rory from “Gilmore Girls”!  But unlike the girlfriend, wifey is considered old at what, 30 at the most?  And isn’t she too classy for Howard? Perhaps she and Pete can relate because of the breeding/outward propriety angle.

As with most of Don’s affairs, the interaction between Pete and Beth is pretty artful and symbolic, if oddly stilted.

For one, I can’t get over how “Mad Men” is filled with attractive, middle-class married women prowling downtown bars and parking lots in search of strangers to have sex with. (Betty, too!) I guess it’s supposed to show how unhinged they were by their suburban robo-wife lives. But I can’t quite see that happening with the moms I knew from that generation and period. (Or perhaps all those trips to Loehmann’s were code for something else?)

One thing that didn’t add up was why Beth was there in the first place. She seemed to know that her husband wasn’t coming home. Was it all a setup? 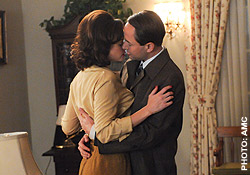 In keeping with Beth’s seeming emptiness and oddness, some of her lines were as prim and stiff as her outfit and pearls. That was a match for Pete’s repeated, “It’s a lovely house.”

But before they get to the house, Beth proves that Pete is not comfortable in the driver’s seat. (She’s in charge.) Once they arrive, Pete says, “I’m not going to leave you until I’m sure you’re not hysterical.” But in the end he’s the sobbing one. She’s cut off and distant, and talks about her fear of the city and hobos (hobos again!) and the fact that from space, the earth looks so “tiny and unprotected.”

Is Pete in this for the sheer escape, to one-up Howard, or as some sort of death wish, in terms of being caught by Trudy?  He doesn’t seem to know, but as ever, he feels angry and unacknowledged.

There’s a great scene in which Campbell asks Harry why women always get their way. ”Why do they get to decide?” he asks. Harry says, “They just do.”

The episode focused on gender power struggles  amidst political power struggles (Vietnam and Mao are mentioned), all around a popular culture cycling as fast as a Maytag. It ends with the Beatles song for which John Lennon was the artist, offering a piece of himself in the midst of change. And it looks like, for the moment at least, Megan Calvet (the name she auditioned with) is at ease, exercising her rights, and listening to her other daddy.

mad men, tv
9 comments about "Episode 508: Exploding Skis, And 'He's Not Just A Boss, He's The Head Of Desserts!' ".
Check to receive email when comments are posted.
Read more comments >
Next story loading