Episode 509: Hunger Games, Man Vs. Fish, And Putting The Man In Manischewitz! 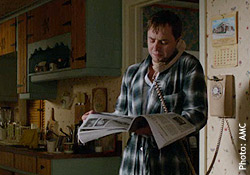 Okay, bubelas. “Dark Shadows,” the latest episode, certainly had a dark (and shadowy!) streak, in that it was all about competition, and the effects of jealousy. It was about working to get your mojo back, but still needing to poison the well of others who threaten you, even though you may have gotten “everything.”

Sadly for Pete, this week he makes another failed attempt for power and to gain Don’s swagger with the ladies. Plus, he prematurely tells the partners about his inclusion in the New York Times Magazine piece, and his long talk with his new best friend, “Victor."

The magazine piece, by Victor Navasky, did indeed appear at the time, and divided top (not “hip”) agencies into competing schools of philosophy: In a note, ace commenter Tom Messner broke it down for me as:  “Ally is called existentialist and BBDO is pragmatic. Ogilvy is Platonist, if I recall. Bates is empiricist.

Wells (which Don disses as “Peter, Paul and Mary”)  is the Theater of the Absurd…. No wonder Navasky would not include SCDP--they should have sent Cooper. He could have been… the Shintoist.”

But Bert Cooper loses some of that Zen when he and Roger join in to snatch an account without Pete’s knowledge of Pete. (“When two men really, really, hate each other,” Roger explains to Michael Ginsberg, as if explaining the birds and bees of SCDP.) 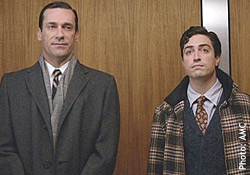 The fact that Roger hates Pete is not new. But I was surprised that with his less-than-honest actions this week, Don shows that he’s developing a parallel problem with Ginsberg. The kid with the frayed collar has been on a creative tear. Going over the agency’s work to submit to the Times, Don sees that Ginsberg’s been doing everything -- and it gets under his skin. Looking through Michael’s “Shit I gotta do” file, Don gets inspired to create some ads of his own for Sno Ball.

On presentation day, he leaves the kid’s work in the cab, even though the “Sno ball in your face” idea is better than his own. (A case of picking the devil you know, I guess!) In its literal aggression, Ginsberg’s idea reminded me of “How’d you like a nice Hawaiian punch?” –- which, as a catchphrase in the mid ‘60s, was the scourge of elementary school teachers who had to supervise playgrounds at the time. And the roster of people shown in Ginserg’s ad -- cop, teacher, Indian chief -- also suggested the “You don’t have to be Jewish to love Levy’s” campaign, which was winning awards for DDB around then.

After Don sells his devil to the client, the two have that rough (hellish) scene in the elevator, in which Draper dismisses Ginsberg with “I don’t think about you at all.”  While it’s a pretty chilling putdown, it’s also a big, fat lie.

Whereas Roger is so charming, and Pete is so unlikable, that their struggle isn’t as sad. Roger’s reconnection with Jane at first seemed typical -- they were using each other, but she got the better end of the bargain. (And closed on an apartment in a remarkably short time. 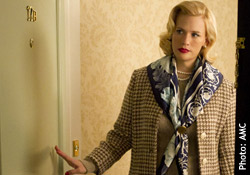 The “Fiddler on the Roof” “cast or audience?” line was pretty funny. I also loved his assertion at dinner that he likes the way Jews, (or “you people” ) keep “track of each other.” But because he was jealous that the Fiddler’s rich son was flirting with hisbeautiful, Semitic soon-to-be ex-wife, he had to go back and poison her new digs -- a parallel action to Betty’s polluting of 73rd and Park.

Let’s talk about less-fat Betty. The minute I saw her still-padded wrist weighing her four ounces of protein on her little kitchen scale in the opening scene, I knew it was coming:  Weight Watchers!

Full disclosure: my uncle, Albert Lippert, founded W.W. with Jean Nidetch in early 1963, in a room over a movie theater in Little Neck, Queens. (A movie ticket was $2, so that’s what Weight Watchers charged per meeting.)

Based on the solid combo of the New York City Board of Health diet plus “group support,” the business grew so prodigiously that by 1978, Weight Watchers was bought for serious millions by, I swear, Heinz.

And the most interesting sociological fact about the (still-going!) company, aside from its early awareness of, and attendance to, America’s obesity problem, is that in hiring clerks and lecturers who came directly out of the Weight Watchers classes, the company allowed for competent (now-thin and well-dressed!) housewives with no prior business experience to enter the work world. 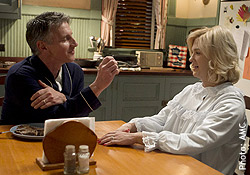 While the lecturer pictured seemed a tad more perfectly pulled-together than your typical group leader at the time, the portrait of the class was dead-on, except that members were weighed behind a screen in the back of the room. (But such authenticity would have deprived us of the good news, poundage-wise, about Judy Steckler!)

Still, there’s no doubt that the program would have been big in Westchester by then, and would have provided someone like Betty with a much-needed outlet for support and feedback. The classes might have helped her lose weigh, although I don’t remember anything in the literature about sticking the nozzle of Reddi-Whip directly into your mouth, schpritzing, and then spitting it out, after seeing your ex-husband’s gorgeous, flat-bellied new wife in her swanky apartment, dressing.

(Early bulimia, perhaps?  Betty certainly has what we would now call a case of “disordered eating.” The reason she was losing so little or “maintaining” is that she was cheating.)

Still, Betty could apply the psychologically based weight loss tips to the rest of her life, and it looks like she’s trying. The midnight eating scene with Henry was sweet. Obviously, the encouragement she was able to give was regurgitated from her new Weight Watchers vernacular.  Henry’s pleased with her support, while she’s no doubt thinking that in divorcing Don, she also jumped ship too soon and backed the wrong horse. (And in mixing metaphors for a third time, even though he’s big in political circles, Henry can’t park wherever he wants; he’s “not an ambulance”!). 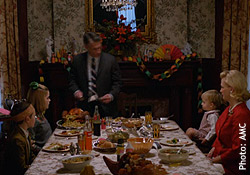 I always wondered why Megan married Don so quickly when she could have had her pick. The note that Betty finds from Don to “Lovely Megan” goes some way toward explaining it. It’s incredibly smart and romantic, and odds are Betty never got one like it. (The fact that it’s written on the back of Bobby’s drawing of a smiling harpooned whale doesn’t help her mood.)

Still, Betty’s telling Sally about Anna because she was jealous was such an awful and selfish thing to for a mom to do to a kid. Betty acted like the evil witch poisoning Snow White’s apple. (Meagan does look like Snow White, and she and Don live in the um, Big Apple!)  Whereas Megan’s response -- telling Don that if he got on the phone and started a screaming match, it was just letting Betty win -- was knowing and insightful way beyond her years.  She’s clearly more of a grown-up than either of them. But even she can’t keep the toxic air from getting into the apartment.

I loved the juxtaposition of the Thanksgiving scenes, with Betty’s family looking just like a Norman Rockwell portrait. And how much better this Thanksgiving is than the previous one at Henry’s mother’s!

Bobby says he’s happy to have two big houses and a sled. But in having to go between -- and psychologically navigate -- the two big houses, Sally is learning to be as cruel and manipulative as her mom.

Betty’s little speech, that she’s thankful that she has everything she wants, but with the additional self-serving zinger -- "and that no one else has anything better" -- shows how much progress she hasn’t made.

(As for her tiny-portioned plate, I’m pretty sure that Brussel sprouts are free -- as in, have as many as you want. Why stop with one?)

As Roger tells an irate Peggy in the elevator, "This is the way it is. Every man for himself."