DirecTV CEO Says Blackouts May Be Necessary, But Not Pac-12 Network 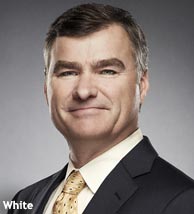 DirecTV CEO Michael White said Friday that the company will continue to be aggressive in pushing back against escalating content fees and won’t shy away from station blackouts in the process. At the same time, the satellite operator may not offer the soon-to-launch Pac-12 Network, which will include a national feed and six regional ones this fall.

Carriage disputes with the Sunbeam and Tribune groups have led to stations going off DirecTV this year already. “I don’t like it, but when necessary, we’ll do whatever it takes … If we have to go dark, we’re going to go dark,” White said at an investor event. “We’re going to do the right thing for the long-term health of our business and consumers.”

He added that in negotiations the company is being aggressive in terms of landing “most favored nation” (MFN) clauses that ensure DirecTV isn’t paying more than competitors, while suggesting the satellite operator is looking to receive some MFN-related benefits from its reach.

“It’s no longer rate -- it’s rate and it’s penetration, and we are going to be treated fairly consistently with our 20 million subscribers,” White said.

In looking to rein in content fees, White said DirecTV isn’t sure what it will do with the Pac-12 Network group. “We’re not going to have seven channels -- I can assure you of that,” he said.

DirecTV also has no plans to carry the Longhorn Network and is also figuring out its approach to two new regional sports networks owned by Time Warner Cable in Southern California, which will carry Los Angeles Lakers games.

Separately, White said that growth in “NFL Sunday Ticket” customers is more likely to come from current DirecTV subscribers than from customers switching to the satellite operator. A current challenge is trying to persuade the approximately 1 million customers who received the package for free last year via a new contract to pay for it this fall.

“It’s more to do with that than it has to do with kind of a significant uptick in the franchise,” he said.

About 2 million, or 10%, of DirecTV customers receive the package and White said research doesn’t suggest it’s going to zoom upward in at least the near term.

White said that even as DirecTV looks to hold onto subscribers, it is being judicious in terms of deals aimed at retention.

“We are making conscious choices for the bottom-end customers to not chase business that we don’t think we can get a profit on, a return on capital on,” he said.

In the first quarter of this year, DirecTV’s subscriber level increased 3% to 19.97 million versus the same period in 2011.

satellite tv
1 comment about "DirecTV CEO Says Blackouts May Be Necessary, But Not Pac-12 Network".
Check to receive email when comments are posted.
Next story loading