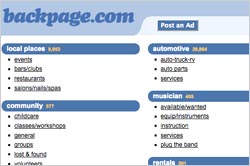 Siding with Backpage.com, a federal judge in Washington has blocked a new criminal law aimed at curbing sex trafficking of minors.

The law, which had been slated to take effect on Thursday, makes it a felony for Web site operators to allow users to post ads for "commercial sexual acts," when those ads contain images of minors. The Village Voice Media's Backpage.com filed papers earlier this week asking the federal court to declare the law invalid.

"Although its ostensible motivation -- to prevent the sex trafficking of children -- is laudable, the law is not," the company argued in its application for a temporary restraining order.

Backpage argued that the law, SB 6251, potentially affects every site that accepts user-generated content by imposing new policing duties on Web sites. The Washington statute says Web site operators are liable if they allow users to post explicit or "implicit" prostitution ads, unless the site operators obtain drivers' licenses or other identification of individuals depicted. "These obligations would bring the practice of hosting third-party content to a grinding halt," Backpage argues.

The classified site contends that the law is unconstitutional for several reasons, including that it marks an attempt by a state to restrict interstate commerce.

"If this Court does not declare SB 6251 invalid and enjoin its enforcement, Backpage.com and other service providers throughout the nation who cannot review the millions of third-party posts processed by their services to identify potential ads for commercial sex acts in Washington will have a daunting choice: block significant amounts of third-party content, most of which is lawful, or gamble against the risk of felony criminal charges, penalties and imprisonment," the company argued.

On Tuesday, U.S. District Court Judge Ricardo Martinez in Seattle issued a temporary restraining order preventing the attorney general from enforcing the law. He scheduled a further hearing for June 15.

Other judges throughout the country have sided with Backpage.com and Craigslist in lawsuits stemming from sex ads. In those cases, the judges ruled that the Communications Decency Act immunized Web sites from liability for content posted by users.

Even though Craigslist prevailed in litigation, the company decided in 2010 to shutter its adult listings. The company predicted that the ads would migrate to other sites.