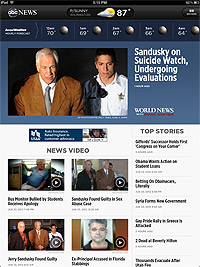 So much for “real-time” being of the essence in digital media along with eye-popping interface design. In an act of sensible retreat from one of the most annoying interfaces yet developed for the touchscreen, ABC News recently issued a new and much-improved app for the iPad. The design decisions the company made here appear to be indicative of the ways in which we overdo new and novel technologies so we can pull back to a more sustainable approach.

In this case ABC News is rethinking a year-old commitment to the globe interface. I confess that I never stuck around after first reviewing this misfire when it arrived a while back. I found it all so disorienting and silly that I was not even tempted to load it again. The gist of it is that a free-wheeling 3D globe was composed of thumbnails for real-time feeds of the latest ABC News stories. There was an option for another more linear way to engage the content, of course, but the experience seemed optimized for the globe.

Was it only a year ago that most designers scrambled to find ways to keep those iPad users swiping and tapping at all costs? The obvious problem was that you couldn’t keep track of where you were on the globe at any given time, so you couldn’t be sure you were getting a complete view of the news. Worse, the interface was pretty much pointless.

The interesting twist in this story is the new version of the app which actually reaches back to an early twentieth-century convention of newspaper editions. Although the contents of the news page are updated throughout the day, the splash page at entry reflects the daypart to offer a morning, afternoon, and evening or weekend “Edition” of the experience. According to Paid Content’s Staci Kramer, who interviewed ABC New SVP Joe Ruffolo, the editions have distinct characters, with more short news bites in the morning and more lean-back features for prime-time reading in the evening. The app also ties in with the local ABC affiliate for more regional news.

The idea here is that over time ABC News came to see how and when people accessed the iPad app, so rather than stick with the real-time 24/7 news feed conceit it focused the design around the peak use times. AOL had something like this in mind with its daily updates to the Editions aggregation app. In both cases the media companies are invoking analog media metaphors for new media in a way that gives the content a certain shape and tone.

There is a kind of pleasant tension between the retro nomenclature and the new technology. There is even a comforting blandness to the ABC app. It looks like a muted USA Today app in some respects, with very clean and clear sections and a less-is-more aesthetic. In fact, you have to drill into the interface to surface the usual news section that are front and center on Web sites and many other apps.

Much more like a newspaper than most apps, this one gives you a broadsheet view of the latest news near and far without complication. And while the ABC News app shows that brands are not hidden, their presence is not overbearing. It feels less like a promotional tool than many network apps.

It is good to see this second wave of touchscreen development emerge as developers come back at the iPad for another run. Magazines and newspapers both have retreated from the extravagances of early designs, where everything spun and floated simply because designers knew that they could.