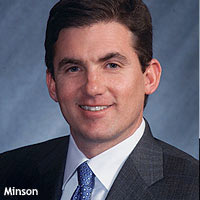 As part of yet another restructuring effort, AOL is recasting its CFO, Artie Minson, Jr., as Chief Operating Officer.

In his new role, Minson will oversee the formation and execution of three new operating units, including the AOL Membership Group, Content Brands Group and Advertising.com Group.

AOL CEO Tim Armstrong said Friday that the two roles -- CFO and CMO -- were not dissimilar.

Minson “has played and will continue to play a critical role in our capital allocation process as we continue to ensure that our resources are being allocated to the areas where we see the greatest opportunities for returns,” Armstrong said.

Also, as Armstrong noted, Minson has taken on a number of operating roles over his tenure at AOL, including the oversight of subscriptions, search, mail, mobile, and most recently, the AOL content operations.

Though not expected to complete the process until the end of the year, AOL said Friday it was already preparing “profitability information” for each of its new operating groups.

Simply put, however, AOL sees these latest changes as a better alignment of its assets.

“This new role and operating structure will allow the company to go deeper on its focus on profitability, coordinated business execution, and resource allocation across its portfolio of brands and services,” according to an AOL spokeswoman.

The corporate areas of AOL’s business -- including sales, technology, corporate communications, brand marketing, finance, legal, and human resources -- will continue to report up to Armstrong.

The Content Brands Group, so-called, include AOL's portfolio of content and service brands. The Advertising.com Group includes the companies’ enterprise services and network businesses, including ADTECH, Pictela, GoViral, 5Min and The AOL On Network.

AOL has tapped Peter Crist to serve as interim CFO, while it searches for a more permanent replacement.