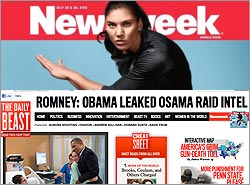 Yet another rich would-be print publisher is retreating from the field.

The family of the late Sidney Harman is no longer contributing money to the Newsweek Daily Beast Co., the joint venture formed by Harman in cooperation with Barry Diller’s IAC. By halting capital contributions to the JV, the Harman trust is effectively lowering its 50% stake in the company, as IAC continues to invest in the loss-making operation.

This, in turn, will give IAC control of the company.

The Harman family explained in a statement to Reuters: “The Harman family remains supportive partners in the business of Newsweek Daily Beast, including service on the Board by Jane Harman and family participation in various informal roles. However, given the death of Sidney Harman, who was actively involved in the Newsweek Daily Beast business, the Harman trust has indicated that it does not intend to make further capital contributions to the venture."

Sidney Harman, who made his fortune from the stereo business, acquired Newsweek from the Washington Post Co. in August 2010. While IAC appears to remain committed to Newsweek Daily Beast, the loss of one half of its backing is more bad news for the beleaguered magazine, which has suffered its share of losses as part of the general decline in print advertising.

From 2006-2011, Newsweek’s total ad pages fell 62.6% from 1,991 to 745, outpacing the magazine business overall, where total ad pages declined 31% over this period, according to the Publishers Information Bureau.