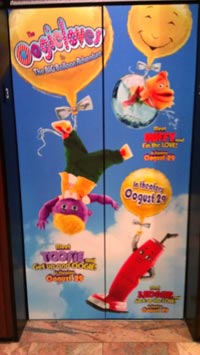 BlogHer conventions are not a cheap ticket, and this year’s was no different as more than 5,000 women (and some men) convened on the New York Hilton and were courted by 130 sponsors, plus President Barack Obama.

The live video broadcast in which Obama opened the official conference was a nod of respect to the influence and the legitimacy of the women who are bona fide media properties. (GOP contender Mitt Romney’s decline of the offer to appear was noted every time the Obama clip was aired.)

Martha Stewart on day one broke the news that Toyota will be a sponsor of her American Made awards honoring products made in the USA. The program includes a two-day workshop in Grand Central in October.

The delegates of BlogHer are small business owners, and many work from home alone. So let loose in a hotel for a few days in the company of their peers, this girls’ night out starts to resemble a Las Vegas bacchanal, powered by chocolate yet also offering lactation rooms.

On the lighter side, Hershey partnered with WalMart for this year’s Camp Bondfire, a suite where you could make real s’mores over tabletop fire pits. Like most sponsors, professional photos were taken galore with the request to tweet them out using a hashtag.

Sh*tty Moms were one of the most successful at making photos push out to the Twitterstream as the authors book-ended women into a Sh*tty Moms sandwich in conjunction with a new book launch promotion.

It wasn’t all fun and games and swag -- although the official BlogHer ’12 tote bag contained about 10 pounds of freebies.

Bloggers are thirsty -- for knowledge and products to help build their platforms, for networking face to face with others to learn how to do things better, and for insight into how to cultivate a following attractive enough to make a big brand want to pay them.

It’s no coincidence that a panel on The Brand-Blogger Connection had the largest seating allotment and was still standing-room only. The advice bloggers got for reaching brands: Be authentic. Bring a real value proposition to the table. Be persistent. And cut straight to the chase. Engage through Twitter. Have a plan for mobile.

The most effective bloggers get the full Madison Avenue treatment during BlogHer with special offsite perks and packages.

And since for some it’s the first time they’ve ever been away from young children, they are ripe for pampering.

Apart from chocolate, vibrators were a big topic of conversation among the women waiting to book their massage appointments at the RosaceaFacts suite.

Love was also in the air at the elevators.

Taking over the doors of the Blog Her elevator banks were The Oogieloves and the Big Balloon Adventure. This new independent movie encouraging kids to move debuts in theaters Aug. 29 and is backed by the same producer who brought the Teletubbies to the U.S.

Lysol promoted its new Power and Free (of hydrogen) cleaning product by hosting a kitchen doubling as a recharging (power) station. Euro RSCG hired a songwriter to come up with songs on the spot that wove in the product name. Here’s mine.

Attendee research by BlogHer indicated that 32% of the women write three or more blogs and the #1 thing they blog about is their lives.