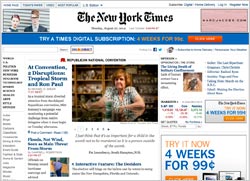 The New York Times has relaunched its online video platform at NYTimes.com, with a new design, larger player and improved navigation. The revamped platform is designed to be compatible with multiple operating systems and devices, including the Web, smartphones and tablets.

The NYT’s mobile apps have also had their video components upgraded.

Under the new system, videos are organized into channel pages based on their subjects, with categories including News/TimesCast, editor’s choice, world, U.S., business, science, opinion, arts, style, sports and “latest news." Top-of-page navigation tools are intended to make it easier to browse the archive.

This is just the latest in a series of digital relaunches and upgrades at the NYT.

In May, the newspaper announced it was updating its iPhone and iPad apps to enable customized reading. The new versions include automatic overnight content downloads, allowing users to minimize the need for tedious downloads during high-traffic periods. It also allows users to choose which content sections and blogs they are interested in, saving on unnecessary bandwidth and data fees.

Also on Monday, the New York Times Co. announced that it sold its About.com business (including ConsumerSearch.com and CalorieCount.com) to IAC for $300 million in order to focus on its core businesses in news media.

These digital moves come as the newspaper forges ahead with the digital subscription strategy implemented in April 2011. At the end of the second quarter, the company had around 532,000 subscribers paying for digital editions, up from 472,000 at the end of the first quarter.