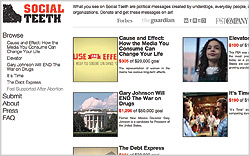 A young entrepreneur believes that so-called Super Pacs -- corporate-funded political action committees -- are disenfranchising less well-heeled citizens from the political debate as it plays out in the media. She is on a mission to make the airwaves more accessible to them via a new Web site designed to raise funds for political ads from smaller independent groups.

Her name is Elaine Chang, and she has enlisted a media big-leaguer -- Aegis Group -- to help get her San Francisco-based start-up going.

Chang's latest venture is an online platform called Social Teeth, billed as a sort of Kickstarter for political ads. The site is designed to showcase TV spots from independent advocacy groups and candidates that need funding for campaigns. There is a mechanism for supporters to donate funds via Stripe on the site.

Chang has partnered with Aegis’ Jumptank and Carat to help plan and implement campaigns that gather a certain threshold of "likes" and gather enough funding via the Social Teeth site. Combined, the partners would take 5% of the total funds raised for each campaign.

Social Teeth is the latest example of so-called “crowd-funding” sites that use online social communities as a way to raise awareness, interest and dollars for various causes.

Chang said she was motivated to launch the site because of the impact that Super Pacs and other well-funded political groups have had on the airwaves. She also cites the U.S. Supreme Court’s 2010 Citizen’s United decision loosening corporate restrictions on donating to PACs.

Groups that have mega-cash can buy so much airtime that it’s virtually impossible for people with opposing viewpoints -- and few dollars -- to get their messages into mainstream media, Chang asserts. In effect, she says Social Teeth is an attempt to “democratize” the political ad process.

She hopes Social Teeth will help right the imbalance -- if the concept catches on with enough consumers. “We see the current political season as a beta period” for the new site, she said.

Prior to starting Social Teeth, Chang, a 2010 Stanford grad, worked at startup Better Place, a service provider to the electric car industry.

Her latest effort is currently being funded “from my savings account,” she says, although potential financial backers in the San Francisco area have been approached.

JumpTank partner Sam Huston says the company got involved because “we think this is one of the ways in which the media world is moving.” JumpTank’s role is to help shape and plan campaigns that are seeking funding on the site. Sibling agency Carat would implement the buys.

Huston says most of JumpTank’s work will come after a group achieves its funding goal. “But we’ll also provide a loose framework for a campaign ahead of time,” he said.

Currently, the Social Teeth site is showcasing campaigns supporting gay marriage, a family planning advocacy group, Libertarian presidential candidate Gary Johnson and a few others.  Right now, Johnson is furthest along in raising money. Per the site, he has raised nearly $1,300.00 toward his goal of $50,000.

This article intially appeared in OnlineMediaDaily on August 24.