Dating Site Operator Can Proceed With Lawsuit Against PayPal 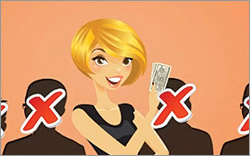 An entrepreneur who runs "nontraditional" dating sites like WhatsYourPrice.com has won a round in court against Paypal, which he said wrongly refused to process payments to the sites.

"The Court finds that whether PayPal breached the parties’ contract by terminating plaintiffs’ accounts is a question best resolved on summary judgment or by a jury," Illston wrote. The ruling, issued late last month, rejected PayPal's motion to dismiss the lawsuit at a preliminary stage.

Wey alleged in court papers that PayPal permanently stopped processing payments to WhatsYourPrice.com and other sites last year. PayPal allegedly told Wey that it had banned his sites because they violated the acceptable use policy, which prohibits the sale of "certain sexually oriented materials or services."

WhatsYourPrice.com allows people to purchase dates with other users. "Just name a price, and if your offer is right, you'll get a YES and you're off on a first date," the site says. Wey says in court papers that WhatsYourPrice and his other dating sites don't allow nudity, obscenity or prostitution ads.

Wey alleges that PayPal's reasons for terminating his accounts were pretextual, arguing that the company continues to process payments to other dating sites that potentially violate its terms of service.

The complaint against PayPal also included an allegation that the site violated antitrust law. But Illston ruled in PayPal's favor on that count. She found that Wey didn't sufficiently allege either that PayPal participates in the online dating market, much less that it is attempting to monopolize it.

>
legal, web sites
1 comment about "Dating Site Operator Can Proceed With Lawsuit Against PayPal".
Check to receive email when comments are posted.
Next story loading