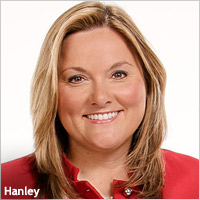 It’s no secret that Nationwide Insurance spends less money on ads and media placements than competitors Geico and Progressive do. As most sentient media-consuming beings have noticed, Geico and Progressive have ad-bought their way into ubiquity; for all intents and purposes, they’re the broadcast and cable equivalent of the sky. Nationwide, on the other hand, allots its marketing and media dollars far less frivolously.

It’s a responsibility that Jennifer Hanley, senior vice president of brand marketing for Nationwide Insurance, takes quite seriously. “To be frank, the biggest challenges we face are external,” she says. “With all the [marketing] spending that goes on in this industry, we have to punch above our weight all the time. We have to make sure our messages are truly differentiated in the marketplace.”

With the release of a new campaign voiced by Julia Roberts (“Join the Nation”) and a progressive, early-adopter approach to the digital and mobile spaces, Nationwide’s marketers have done just that. While other insurance companies pound a we-have-the-lowest-prices message into the ground, Hanley and her 100-strong team have chosen to focus on what “on your side,” Nationwide’s longstanding marketing tag, stands for. “What we’ve been trying to do, with this new campaign and with everything online, is get at the head and the heart of who Nationwide is,” Hanley explains.

At the same time, Nationwide has set its sights even higher. It hasn’t been afraid to throw ad dollars and pr muscle behind its campaign to warn consumers of the risks of texting-and-driving. “There’s a responsibility that comes with what we do,” Hanley says. Too, she is also the rare exec in her field willing to address the perception of the insurance business itself. “Sometimes my biggest frustration is that people don’t understand what a well-intentioned industry insurance is,” she explains. “When huge, catastrophic events happen, we’re there. We do everything we can — we move trees off homes, we cut checks for people. That’s what ‘Join the Nation’ is all about, how we’re a company in an industry with people who work very, very hard to restore life back to order for customers. When you think about all the messaging in this category — all the gimmicks, all the talk about price — that, at the end of the day, is what truly matters.”

Hanley arrived at Nationwide five years ago, armed with more perspective than most execs in her age and professional bracket. She started working at Newell Rubbermaid at the precocious age of 16, leveraging a job working on the company’s internal newsletter into a fully paid college scholarship. She returned there after graduation, handling a wide range of marketing-related tasks — everything from package design to public relations — before decamping for the Mac Tools Division of The Stanley Works (where she led retail operations and marketing communications) and then The Scotts Miracle-Gro Company where she served as director of consumer promotions.

Upon joining Nationwide, Hanley was confronted with a challenge in the form of the exploding digital and mobile spaces. At that early point in her tenure, she made a conscious decision that has guided Nationwide’s marketing ethos in the years since: She chose to grant consumers a degree of control uncommon in the insurance space.

“All brand marketers eventually face the question of control,” Hanley says. “But consumers are going to take it upon themselves to have conversations about the brand. It’s our obligation to be a part of that, to listen and respond when appropriate, and not just with a few words on Facebook or Twitter. We’ll reach out to people personally, even if they’re just looking for information.”
Hanley takes tremendous pride in Nationwide’s way-early entry into the mobile space. Among the major insurance players, it was either the first or second company, depending on whom you ask, to make a mobile app available to consumers. “Launching that app was very important to us, because it showed consumers that we would connect with them in whatever way and on whatever platform they wanted to connect. That innovation put us on the map,” she recalls.

And still Hanley bemoans, ever so slightly, that Nationwide “could’ve started even a little sooner than that.” The obstacle, if you want to call it that, was the company’s fiscal prudence. “One of the benefits of not having a gigantic budget is that you can be very judicious with your spend,” she jokes. To that end, Hanley and her team “test and learn our way into everything we do;” few, if any, programs see the light of day before they’re examined closely.

Impressively, given that context, Nationwide has managed to stay quite aggressive. As much as anything else, this can be attributed to Hanley’s belief in the power of digital programs. “If you’re in a situation where budgets are adjusted to inflation — where you’re only maintaining and not getting any increases — you have to put your toe in the pool of digital. That’s what we’ve done.”

Hanley doesn’t do many things halfway. Enlisted last season as an assistant coach for her son’s basketball team (she has another son and two daughters as well), she took to the role so enthusiastically that, as of deadline, she was being lobbied to accept the head-coaching gig. Her children’s activities take up most of her time outside the office, yet she remains involved with a host of industry associations, among them the Advertising Women of New York. She wakes up at 5:30 a.m. and goes to bed somewhere between midnight and 1 a.m. “I have no control over my day. I’m a mom and a marketer,” Hanley jokes.

So while she counts music, writing and poetry among her passions, she only has a small window of time to indulge them: during her commute. “I try not to schedule conference calls during it, because that’s my ‘me time,’” she says. “Sometimes it gets cut short, but I cherish it all the same.”