Welcome to the Fiberhood 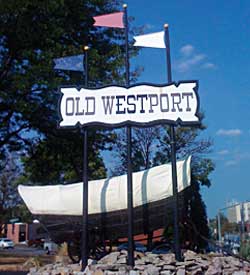 By choosing the Silicon Prairie as base camp for its Google Fiber rollout, the company makes a statement about its pioneering status. And yes, everything is up to date in Kansas City.

As Kansas Citians in both Missouri and Kansas race to pre-register their neighborhoods for the first Google Fiber connections, on neighborhood has thus far been overlooked. It’s the neighborhood Google calls home.

In July, Google opened “Fiber Space,” a sleek showroom and event space in two small brick buildings on Westport Road in Kansas City. The space, at the intersection of State Line Road, perches on the edge of Missouri. But what’s most intriguing is that the building sits on the outskirts of an historical neighborhood known as Westport.

Starting in the 1850s, this was the port to the West, civilization’s last stop, the town where pioneers and travelers outfitted their covered wagons and stocked up on the supplies they hoped would carry them through the wilderness of the Oregon, California, and Santa Fe trails. Today, Westport is a Kansas City neighborhood known for its century-old houses, funky mom and pop businesses, tattoo parlors, James Beard award-nominated chefs, a vegan bakery and cafe, and now, Fiber Space, situated exactly half a mile from a covered wagon that bears the Westport sign.

Westport was founded in 1857, just a few years before the take-off of the original high-speed connection: the Pony Express. At first an independent town, Westport became part of Kansas City about 40 years later. Today, one of Westport’s most popular bars and restaurants, McCoy’s, carries the name of John Calvin McCoy, the founder of Westport and one of the co-founders of Kansas City. Directly west of McCoy’s is a bar called Kelly’s Westport Inn, one of the two oldest buildings in Kansas City, and an outfitter for those about to brave the trails. Plaques on buildings and sidewalks testify to the neighborhood’s history.

While the pioneering history of the neighborhood wasn’t the main attraction for Google, it’s a fitting metaphor. The unabashedly heart-stirring marketing campaign for Fiber promises innovations in education (the kcmo district last year lost its superintendent and its accreditation, again, but in August kicked off the 2012 school year with a burst of optimism and new leadership), health care, and public safety. Although residents of neighborhoods, now dubbed “fiberhoods,” in KCMO and KCK are competing to win the first hookups, the overall message of the campaign speaks to the collective good. The slogan on posters, buses and in television ads reads “Let’s do this for __________,” The blank is filled in with everything from “Wyandotte High School” to “our patients” to “Kansas City.”

And by choosing a spot on State Line Road, the street that delineates the two Kansas Cities, Fiber Space also bridges Kansas and Missouri.

“Unless we put this right in the middle of the street, we couldn’t be more representative,” says Rachel Hack, a lifelong Kansas City resident and the community manager for Google Fiber.

Hack scouted the spot for Google herself. She learned of the vacancy after her gym closed its Westport branch, leaving behind a pair of strangely angular buildings and a leaky roof. The place sat empty until Google quietly rented and renovated it. The neighbors didn’t even know it was coming until the night before the grand opening, in July.

So what’s in the house that Fiber built? A model of the toy-car world featured in Google’s commercials, for starters. Huge couches and luminous flat screens. And there is ample evidence of community buy-in from local businesses and organizations. On opening weekend, the University of Kansas Medical Center, which is just a four-block walk from State Line and Westport, launched a series of “long-distance” nutritional information sessions at Fiber Space. Visitors can pick up a drink or a bite at the snack bar, courtesy of local restaurants. Recent visitors took part in a digital cooking class offered by Cupini’s, an Italian restaurant also located on Westport Road.

Snacks, cooking classes, and free health advice? The pioneers would have approved.