A Global Initiative To End Polio And Help Mothers Everywhere 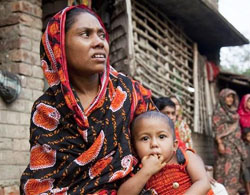 All over the world, mothers strive to keep their children healthy. Mom is the Chief Health Officer of her family. In many countries, mothers will walk miles to get the care her children need.

Imagine being this little girl’s mother. Her name is Rukhsar, and she is the last known case of polio in India. A decade ago, India was responsible for 85% of the world’s cases of polio, but, today, it has been declared polio-free for a year -- a tremendous accomplishment.

If India can do it, it should replicable in the last three remaining countries, which are Afghanistan, Nigeria and Pakistan. India is proof positive.

It will take the world’s commitment.

I went to the United Nations General Assembly with four other mothers and witnessed an unprecedented show of unity from people, countries, corporations and organizations that is taking place. We were all deeply moved.

Global Poverty Project, UNICEF, UN Foundation, The Rotary International, The Gate Foundation, WHO, the American, British, Australian governments and the very presidents of the three countries that remain polio endemic have pledged to eradicate polio so no other mother will ever have to anguish over a child struck with polio.

We all have the opportunity to be a part of history by putting an end to polio. The only other time this has happened was with smallpox.

“This is a matter of health and justice. When children are protected against polio, they are better protected against other diseases,” said UN Secretary-General Ban Ki-moon. “We need to make the right commitment and take the action towards a polio-free world for the next generations.”

The ingredients are coming together.

• New partners are raising their hands and giving resources and dollars

• Organizations are working to bring the costs of vaccines down

Billions of dollars are being spent not just to eradicate polio but to set up systems and access so mothers can not only get the much needed polio vaccines for their children but to get access to the other medicines she needs.

Polio doesn’t just affect the child; it takes its toll on the family, the community.

There is a petition on Global Poverty Project to end polio http://www.theendofpolio.com/home/.

And you can follow the hashtag #endpolio as the world comes together on behalf of moms and children to eradicate this crippling disease from the face of the planet.