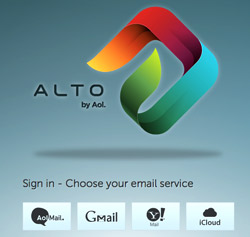 AOL this week is unveiling Alto -- a cloud-based email product, which will attempt to organize users’ disparate email accounts. Alto is not slated for broad release until the first quarter of 2013.

But that’s about to change if AOL has its way. The basis for its new product is "organization by design," using "stacks" that automatically pull out and organize important pieces of a user's inbox.

"When you sort through physical mail, you put it into stacks because it's a natural way to decide what's important, what's junk, and what to save for later,” Ramirez explained. “We wanted to recreate that experience with Alto, but make it intelligent and automatic.”

Users can also drag and drop individual emails to create their own stacks based on sender, recipients, key words, and more.

Despite various innovations, AOL -- a pioneer in Web mail -- has lost ground to Google’s Gmail, Microsoft’s Hotmail, and Yahoo Mail. One such effort, Project Phoenix, failed to capture users’ attention after its elaborate launch in late 2010.

Also of note, the new service automatically sorts users’ daily deal emails and specials from retailers into their own stacks. This will allow for what Ramirez calls “seamless window shopping.”