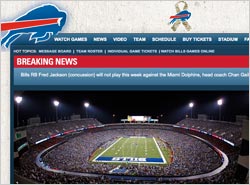 A Buffalo Bills fan is suing the football team for allegedly violating a consumer protection law by sending him "excessive" text messages.

Florida resident Jerry Wojcik says in his lawsuit that he signed up to receive text message updates about the team in September. He alleges that the online terms provided that people who opted in would receive between three and five messages a week.

Instead, he received six messages in the first week after he signed up, and seven during the second, according to his lawsuit. "The excessive calls (i.e., more than five text messages sent during a one-week period) were made without the prior express consent of the parties," he alleges in his complaint, filed late last month in U.S. District Court for the Middle District of Florida. He is seeking class-action status.

He argues that the Buffalo Bills violated the federal Telephone Consumer Protection Act, which prohibits companies from using automatic telephone dialing systems to make calls to cell phones unless the owners have consented. The law provides for up to $1,500 in damages per violation.

If the allegations are true, the football team appears to have technically violated the law, cyberlaw expert Venkat Balasubramani tells MediaPost. But he adds that the facts of this case could support an argument against damages of up to $1,500 per text.

"If there was ever a case to challenge the statutory damages, this would be it," he says. "Presumably, if you're willing to receive five messages, there's no clear privacy violation from the sixth."

He adds that two judges recently took a practical approach to the Telephone Consumer Protection Act by dismissinglawsuits against companies accused of sending a single unauthorized message in order to confirm an opt-out.